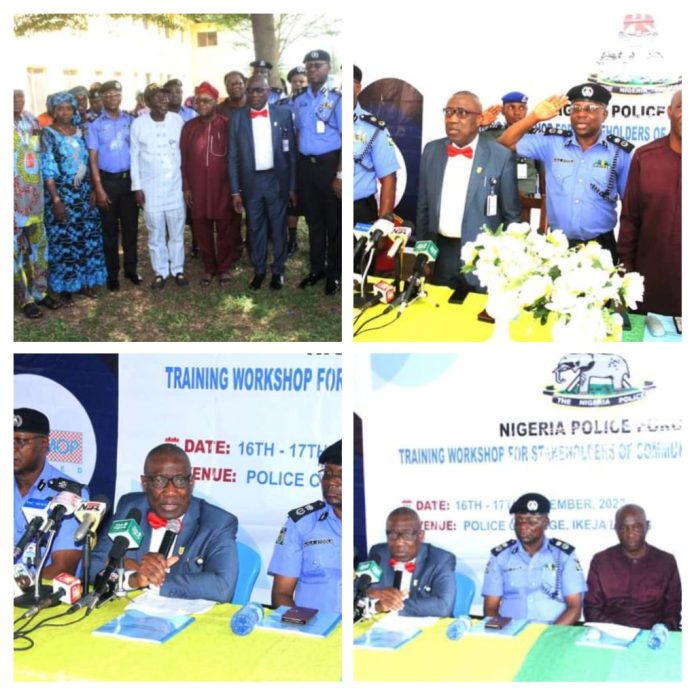 The Nigeria Police has organized a community policing workshop for stakeholders who will drive the policing strategy. The 2-day workshop held in partnership with BAN-DAMOP Limited from 16th-17th November 2022 at the Police College, Ikeja, Lagos, National Association of Online Security News Publishers, NAOSNP can report.

Addressing the workshop, DIG Johnson Kokumo on behalf of the Inspector General of Police, IGP Usman Alkali Baba said: ‘This workshop is organized across the 6 geopolitical zones. It is designed to take on the implementation of the community policing model of the country following its approval and adoption by the Federal Republic of Nigeria in 2020 as internal security of the country.’

‘Public trust and partnership are crucible on which effective community policing rests. It is the law enforcement model that focuses on sharing the responsibility of communal safety and security with citizens.

It is cost-effective and an all-society approach. It strengthens the bond between the police institution and citizens confronting the public enemy. Providing security for the good people of Nigeria is not a one-man business.

Through the partnership of the Nigeria Police and members of the community, there should be synergy and cooperation. Community policing is the essence.’

IGP Baba added: ‘As mentioned community policing is the way to go in addressing the challenges of internal security in the country. I am therefore excited to note that the community strategy as approved by the Federal Government is gradually making waves in Nigeria and is being warmly received by our strategic partners which are the people.’

‘Towards this end, participants at this workshop would be appropriately educated. The CPOs are recruited under the Supernumerary Police division and are expected to voluntarily serve the local communities by complementing the Nigeria Police. There are differences between the conventional Police and the community police officers (CPOs) because they are recruited from among the people/community where they are resident.’

On the preparedness of the Nigeria Police for the upcoming 2023 elections, National Association of Online Security News Publishers, NAOSNP gathered from DIG Kokumo ‘On behalf of the Inspector-General of Police, I would want to say that the Nigeria Police has the capacity to provide adequate security for the electoral process. We did it in Anambra, Ekiti, Osun states successfully so our capacity to do it again at the national level should not be in doubt.’

NAOSNP FELICITATES WITH GOV SANWO-OLU ON WINNING VANGUARD PERSONALITY OF THE...