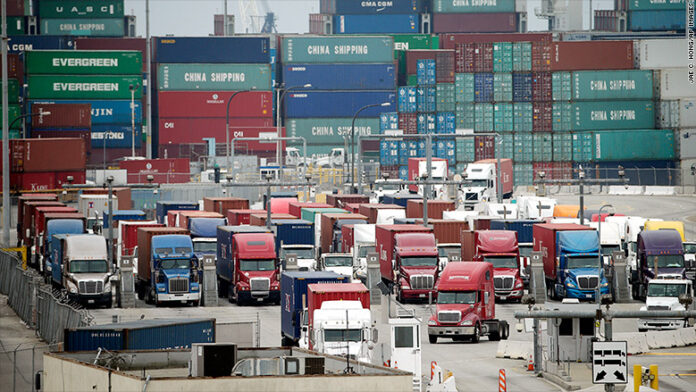 Angry stakeholders, including the National Association of Road Transport Owners, NARTO, and Nigeria Union of Petroleum and Natural Gas Workers, NUPENG, yesterday threw their weight behind three days warning strike declared by the Maritime Workers Union of Nigeria, MWUN, which is billed to start Wednesday to protest take over of Apapa-Oshodi Expressway by heavy duty trucks.

The gridlock has negatively impacted Apapa and its environ, which has made life not only unberable for residents of the area but also crippled businesses locacated in the axis.  This compelled MWUN to convoke a meeting weekend to sensitize stakholders in the maritime sector on the need for the strike.

President General of MWUN, Prince Adeyanju Adewale, who dropped hint of the strike yesterday,  said the union would decide its next line of action, if after the three days, government failed to fix the roads leading to the two ports and the area and address the accompanying traffic bottleneck.

He added that the strike ought to have taken place before now but noted that it was suspended because of appeals by the government.

However, the federal government appealed to the union last night not to embark on the strike, saying work on the expressway was delayed by COVID-19 pandemic and #EndSARS protests which took place nationwide recently.

“Since the information became public, many of them have been calling and begging for time. They insisted that they are not against our action because the seemingly intractable gridlock is also affecting them and that they are indeed in total support of our planned action.

“But they said it is too sudden and pleaded that we give them time to prepare. So, we have decided to give them two days to prepare. Consequently, the warning strike will now start on Wednesday, December 9, instead of tomorrow (today) as earlier resolved.”

Leaders of the union, while giving reasons the members would withdraw their services nationwide and embark on three-day industrial action, said they were disenchanted by the deplorable state of the access roads to the Apapa and Tin Can Island ports which had claimed several lives and caused incalculable man-hour losses, among other dangers as a result of unending gridlock.

The three-day warning strike is one of the resolutions of the union’s National Executive Council, NEC, meeting held in Lagos.

A communique issued at the end of the meeting by the President-General and Secretary-General of the Union, Prince Adeyanju Adewale and Felix Akingboye, respectively, among others, reads: “

The National Executive Council, NEC,    in-Session wishes to draw the attention of the Federal Government once again to the deplorable state of the access roads to the Lagos seaports, and the dangers this pose to lives and properties.

“To avoid the continuous and unnecessary deaths as well as loss of man hours on the failed roads, the NEC-in-session calls on the Federal Government and the Nigerian Ports Authority, NPA, to urgently fix the access roads and make them motorable.

“The NEC in-session unanimously approves the Central Working Committee, CWC, recommendation that the union proceeds on a three-day warning strike to bring to the public space our disappointment over the total neglect of the access roads to Lagos ports by successive government and the urgent need for government to repair the roads.”

Speaking more on the the planned three day warning strike, Adewale told Vanguard that “the three-day warning strike will be total. We cannot continue like this. From Second Rainbow to the ports in the last three weeks, it takes not less than five to seven hours to access the ports depending on when you get trapped.

“When you are leaving the ports, you even spend more hours from the ports to the same Second Rainbow. A lot of innocent lives have been lost, many have been maimed by hoodlums who rob and dispossess victims of their belongings.

“At the end of the three-day warning strike, the response of government will determine our next line of action. On daily basis, our members go through torture on their way to work and back home after work.

“Many of them do no get home until 12 am or more. The same thing happens to other road users on the Apapa-Oshodi Expressway. Many businesses have relocated out of Apapa and its environs to neigbhouring countries because of the failed access roads.

“The implications are huge to the Nigerian economy and employment creation. The government must address the condition of the roads and find lasting solution to the gridlock.”

Earlier, in his welcome address to NEC, Prince Adewale had lamented that “the deplorable state of access roads to Lagos Ports leaves a bad taste in the mouth. It has not only affected businesses but the revenue of government.

“We are not talking about the loss of lives, properties, and the health implications of the unending gridlock occasioned by the total take over of the access roads heavy duty trucks, such as containerised trucks, fuel tankers and others.

“Despite government not heeding our previous calls, we once again call on government to see the problem of the access roads to Apapa and Tin Can Island ports complex as an emergency that should be solved and addressed permanently.

“I wish to call on the Federal Ministry of Works and Housing to hasten discussions with NPA, Nigeria Maritime Administration and Safety Agency, NIMASA, and all the shipping companies responsible for the perennial gridlock that has bedeviled Oshodi-Apapa Expressway, with a view to finding a lasting solution to the problem.”

Reacting to the planned withdrawal of service by the Maritime Workers Union of Nigeria, the National Association of Road Transport Owners, NARTO, said it was a welcome development.

Speaking through its General Manager, Operations, Okafor Stephen, NARTO lamented that the Federal Government appeared to have abandoned road users on the Oshodi –Apapa Expressway to their fate.

He said: “The Federal Government is aware of the problem at the Apapa axis of the corridor but has left commuters and other users of the road to their fate. The planned withdrawal of service by maritime workers is a welcome development.

“By the time the ports are shut, the government will now see the need to address the traffic situation in the area.

“In the past few weeks, it has become so bad that a journey of 15 minutes now takes not less than five hours. I believe the planned strike by the maritime workers is not driven by selfishness, but to make government address the chaotic traffic situation on Oshodi-Apapa Expressway.”

Also reacting, Nigeria Union of Petroleum and Natural Gas Workers, NUPENG, said if the strike would draw the attention of government to the bad state of the road, maritime workers are free to go on strike.

Lagos zonal Chairman of NUPENG, Tayo Aboyeji, said: “We are not on strike, but if strike will draw the attention of government to the plight of road users on Oshodi-Apapa Expressway, maritime workers are free to go on strike.

“The road from Cele to Oworoshoki is almost completed, but the most important axis of the road has been abandoned.”

Also throwing its weight behind the maritime workers’ strike is the Association of Nigeria Licensed Customs Agents.

Its National Vice President, Kayode Farintun, who spoke with Vanguard, said that the strike “is long over due” as the government seemed to have abandoned the maritime industry, despite all that has happened over the years.

The ANLCA National Vice President noted that they had complained about the many problems facing the industry which is the second largest revenue generating sector of the country’s economy, government just turn a deaf ears; while focusing on revenue collection, adding that government had turned a deaf ear to all the appeals.

Meanwhile, Mr Patrick Adenusi, Director, Safety Beyond Borders, a non-governmental organisation, while condemning the federal and Lagos State governments over their inability to tackle the gridlock,  said over one billion naira was lost to the gridlock daily.

According to him, because of the importance of Oshodi-Apapa expressway as the gateway to the nation’s ports, the Federal Government shouldn’t have allowed the problem to degenerate to its current state.

“No matter where you reside in the country, the Apapa gridlock affects every Nigerian because the cost of delay in moving the goods from the ports is shared by everyone who buys one product or the other from any part of the country,” he said.

Apart from the health implications caused by the gridlock, he said the wear and tear on the vehicles, the quantity of fuel wasted, and high rate of accidents resulting from fallen containers and okada accidents are too much to bear.

“In fact, government’s attitude to the whole problem has shown that they have no solution to the gridlock and it is like the problem has become a citizen of the country,” he stated.

Meanwhile, figures from the Federal Road Safety Corps, FRSC, shows that more than 16 people have lost their lives on this road but most people believed that the figure could be triple the number from FRSC.

“On  daily basis, many Nigerians are robbed, beaten and humiliated on this road by hoodlums who take advantage of non-presence of law enforcement agents to inflict injuries on their fellow Nigerians.

Also, due to the activities of the hoodlums on this expressway, people hardly drive nor walk alone for fear of being attacked by the hoodlums,” he said.

But responding in a telephone interview with Journalist last night, Federal Controller of Works in Lagos, Engr. Olukayode Popoola, said: “We are not aware of the planned strike. The Maritime workers wrote a letter giving us a 21-day ultimatum. We had a meeting to explain all the issues to them. They should suspend the strike and give us time to complete ongoing road projects.

‘’Some of the projects were delayed because of some developments, especially the Coronavirus pandemic and #EndSARS protests. Many workers also travelled to their homes and had to be mobilised back to the various sites.”

Engr. Popoola, who could not give specific time for the completion of the projects, said: “The contractors are currently working. The maritime workers should give us time to complete the projects. We are all committed to completing them so as soon as possible.”