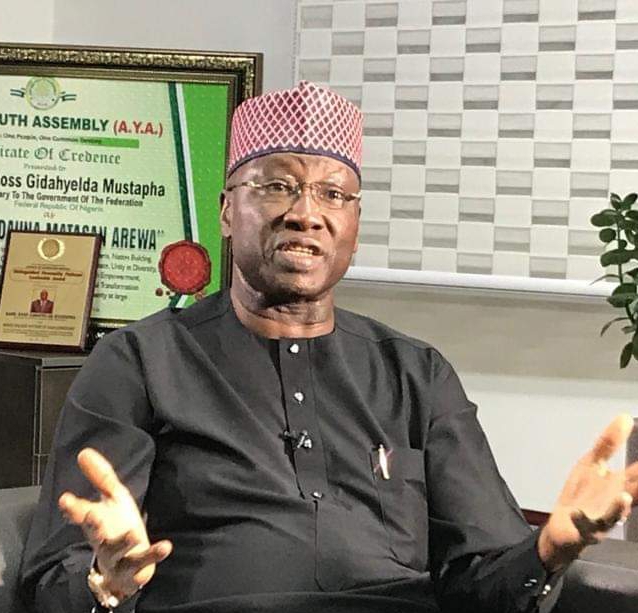 Secretary to the Government of the Federation, Boss Mustapha

The Presidency has expressed its opposition to a bill in the House of Representatives seeking to regulate the Ecological Fund.

The Secretary to the Government of the Federation, Boss Mustapha, especially stated that the proposed law would either clash with or duplicate the existing ones.

Mustapha warned that the bill, if passed into law, would take away from powers the President presently has over the Ecological Fund Office and the funds under it.

The House Committee on Ecological Fund had on Wednesday held a public hearing on ‘A Bill for an Act to Establish the Regulation of Ecological Funds to Address Nigeria’s Ecological Challenges, Particularly Erosion, Landslide, Desertification, Floods, Oil Spillage, Drought, Etc., and for Related Matters.’

Mustapha, in his memorandum to the committee, which was presented by the Director, Pollution Control, OSGF, Mr Clinton Igwe, said, “After a careful review of the document, I wish to respectfully bring to the attention of the Honourable chairman and members of the Committee on Ecological Fund, the observations of the Office of the Secretary to the Government of the Federation on the proposed bill as follows:

“The establishment of a Governing Council in the bill is a replication of the erstwhile bogus National Council on Ecological Problems. The large number of membership makes the project selection, procurement and execution of projects cumbersome and problematic.

“The bill as proposed will replace the emergency/ interventionist posture of the Ecological Fund Office as presently constituted. This will by implication slow down the quick response in dealing with erosion problems in Nigeria.

“The Ecological Fund as presently constituted is not subject to the process of appropriation by the National Assembly. This gives the President the much needed flexibility to effectively and timeously respond to ecological emergencies the fund is created to address.

“If the bill is passed into law as proposed, it will impede on Mr President’s power to use the Fund for emergencies if it has to revert to the National Assembly for appropriation and approvals. It is not always feasible to predict emergencies, hence the inability to appropriate or budget for such disasters or ecological emergencies.

“As the EFO is presently constituted, salaries and allowances of staff are not paid from the Fund. Officers deployed to EFO are mainstream civil servants who draw their emoluments from the federal treasury. It is advisable to sustain less emphasis on recruitment of officers and payment of board members that could be a drain whittling down the impact of the fund on ecological interventions, by increasing government’s Overhead Cost.”