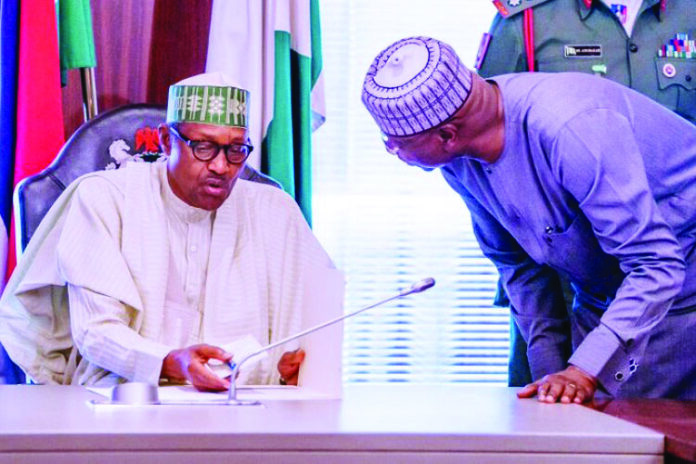 The Presidential Task Force on COVID-19 (PTF) has announced that it will submit its final report to President Muhammadu Buhari in the two weeks.

The Chairman PTF on COVID-19, Mr. Boss Mustapha, made the disclosure yesterday at the task force’s briefing.

He also hinted that the report to the president significantly would address the issue of vaccines in the coming months and years.

He said in recognition of this fact, a suitable transition programme that will take into consideration of the multi-sectoral approach will be recommended.

He also raised an alarm that the country’s COVID 19 infections had started to witnessed yet another significant increase after a period of low numbers.

Mustapha lamented that the analysis revealed that the total number of 1,607 new confirmed cases were higher than the numbers recorded in the week of November 29 – December 5 when a total of 1,102 cases were recorded.

The PTF said 12 states had more than 100 per cent increase, more than double COVID-19 cases.

He said four states (Lagos, FCT, Rivers and Ogun) accounted for 64 per cent of all tests conducted in the last one week while 12 states declined tests in the last week.

Also, seven states did not report a case in at least one week.

Mustapha also said the PTF had observed that some churches and mosques had continued to hold events of large gatherings capable of spreading COVID-19.

He urged all sub-national entities that signed the protocols with these organisations and have primary responsibility for enforcing the protocols and non-pharmaceutical measures to step up their roles of enforcement.

“The PTF has also continued to engage with relevant stakeholders on the issues arising from the impact of COVID-19. These include mental health, drug use, and gender-based violence.

This morning, I joined the Christian Association of Nigeria to launch the campaign against gender-based violence particularly triggered by COVID. It is true that family economies have collapsed, jobs lost, mental health issues have arisen, some persons have taken to drugs and rape has escalated.

The solution is to exercise enormous self-restraint, vigilance and the PTF urges that citizens should take advantage of the mental health programmes nearest to them. In Abuja, for example, the Federal Medical Centre in Jabi is the facility to visit,” he said.

He appealed to all Nigerians to seriously consider putting on hold all non-essential trips and avoid large social gatherings during the Christmas and New Year festivities.

Also speaking at the briefing, the National Coordinator on COVID 19, Dr. Sani Aliyu warned that some of the emerging coronavirus cases required ventilators just as the cases were going back to the level that was seen in April.

The Director-General, Nigerian Civil Aviation Authority (NCAA), Capt. Musa Nuhu. attributed the astronomical airfare increase to as one of the consequences of the COVID-19 pandemic.

Nuhu said aviation, tourism and travel industry were most devastatingly hit by COVID-19 because they were shut for several months, saying the airlines were not making money while there was a fixed cost that they have to deal with, while they also had to maintain the aircraft.

“Two issues we have had, because of the shutdown they don’t even have slots to take their aircraft out and the dollar rate has gone up and they need to raise enough money.

So the problem basically is that of supply and demand. The supply for airline seats internationally has significantly gone down while the demand domestically since we opened has gone up. So it’s simple basic economics 101, when the demand exceeds supply, the prices go up,” he said.