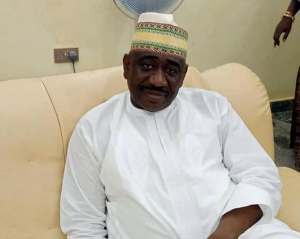 The Chairman of the All Progressives Congress (APC) in Kano, Alhaji Abdullahi Abbas, has directed all their party supporters in the state to reserve their weapons against 2023 elections to attack anyone that attempts to rig elections there and then.

He called on the supporters to decisively deal with any person or group of persons that will attempt to embark on any form of electoral rigging on election day come 2023.

He stated this while addressing a mammoth crowd at the swearing-in ceremony of the newly elected chairmen of the 44 local government councils in the state, held on Friday in Kano.

After brandishing the weapons amidst APC slogan in unison, the acting APC chair asked the thugs to drop the weapons, saying “we will tell you when to use your weapons.

“If you find any opposition rigging the election, don’t spare him. Finish him instantly and nothing will be done.

“This is my punishment. Punishment for anybody rigging election. Nothing would be done,” Abbas declared.

This is apparently the third time the interim APC chairman had called for war against the political opponents, as he recently, during the inauguration of the committee for the party’s registration/revalidation exercise said the party would deal decisively with oppositions come 2023.

In his remarks, Kano State Governor, Abdullahi Ganduje, charged the elected 44 Local Government chairmen and 484 councillors to remain focus and live up to expectations.

He warned them to shun corruption and other related tendencies, reminding them of his administration’s zero-tolerance to corruption.

The governor also tasked the chairmen and councillors to perform well in supporting his administration towards developing the state, especially in the area of agriculture, education and health.

“We have a big task in the implementation of free and compulsory education. Although we are recording successes, you have to rise up to ensure the smooth and successful implementation of the policy in your respective areas.

“Make sure parents have enrolled their wards in schools and punish defaulting parents.

“In the area of security, you should establish good ties with Police to ensure the smooth operation of community policing in order to further secure Kano, which is adjudged to be the most secure state in the north,” he said.

The governor noted that President Muhammadu Buhari has brought gigantic developmental projects such as Kano-Maradi rail line and gas project that would boost industrialization in the state.

The presence of heavily armed thugs wielding dangerous weapons at the event was vivid.

TONY ELUMELU: FROM APPLYING FOR A JOB HE WAS NOT QUALIFIED...