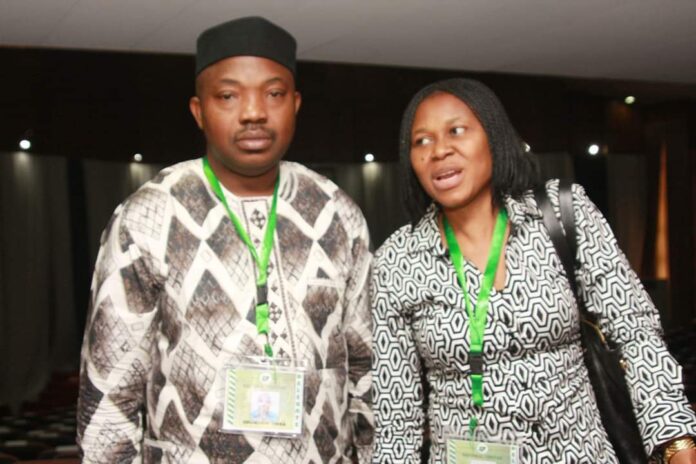 Joe Okei-Odumakin, wife of the late Yinka Odumakin, the erstwhile spokesperson of Afenifere, the pan-Yoruba socio-political organisation, has said her husband died last Friday but the doctors found it difficult to communicate it to her.

Okei-Odumakin said this in a tribute entitled: ‘Yinka: Basking in the shadow that you cast’, according to report on Tuesday.

Odumakin, a prominent human rights activist, died due to COVID-19 complications at the Lagos State Teaching Hospital (LASUTH). His death was announced on Saturday.

But according to his wife, his death certificate showed that he died 10.40pm on Friday as against Saturday earlier announced.

She wrote: “Yinka, it cannot be goodbye, It is goodnight and see you later on the other side with God.

“Since no one is permitted in the Critical Care Unit, we had commited you to the care of the best qualified medics at LASUTH and the hand of God hoping to see you next morning.

“The medics said they could not fathom how to immediately relay the message of your passage to me directly.

“Now that I am in possession of your death certificate, I can see you passed at exactly 10.40pm on Good Friday (April 2nd, 2021) and not in the morning of Saturday, April 3rd, 2021) as initially communicated.

“Due to the principles of the truth and saying it as it is, which Yinka and I hold dear – and which Yinka lived all his adult life for – it is important to immediately put this very important record straight.”

Okei-Odumakin, who is also a prominent human rights activist, vowed to continue to fight for the ideals of her husband.

WHY WE CAN’T LEAVE CHILDREN’S EDUCATION TO PARENTS ALONE – LAGOS...