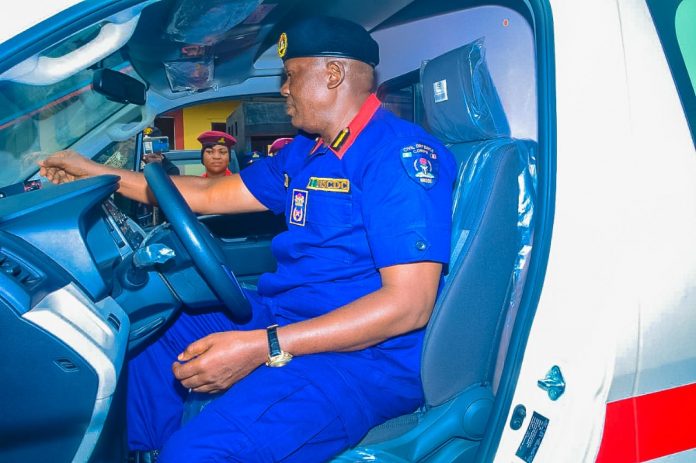 The Nigeria Security and Civil Defence Corps, Rivers State Command has intercepted and impounded 8 trucks in conveyance of suspected illegally refined Automotive Gas Oil (AGO) along Mbiama, border between Bayelsa and Delta State. The trucks were intercepted while the 8 Suspects were on transit out of Rivers State.

In a preliminary investigation report it was gathered that the Suspects presented fake documents and beat several security check points until they were apprehended by the Antivandal Squad of the NSCDC Rivers State Command.

In a press conference at the Command Headquarters, the State Commandant Abu Abdu Tambuwal intimated the newsmen that the arrests was made possible following a tip off; the Intelligence Team and the Antivandal Squad of the Command had being on trail to arrest the Suspects for over 3 weeks.

He relayed that security intelligence further revealed that some unscrupulous economic saboteurs are using the Court Auction Order which has already been executed to perpetrate these nefarious dealings.

” The Command in her renewed vigour to eradicate the menace of illegal dealings in petroleum products in the State made tactical moves by deploying the Intelligence Team and the Antivandal Squad who swung into action having trailed the Suspects for weeks; credible Intelligence revealed that the Suspects were alledgedly using an already executed Court Auction Order to move trucks loaded with illegally refined AGO out of Rivers State to different locations in the country”

Let me use this medium to reiterate our unrelenting commitment to the fight against oil theft, oil bunkering and all acts of illegal dealings in petroleum products in the State. The Eagle eye of the Command is across the 23 Local government and we will not leave any stone unturned; there is a new Sheriff in town and it will never be business as usual… Tambuwal said.

The State Commandant further affirmed that the Command has taken delivery of the Gun Boat donated by the Rivers State Government under the amiable leadership of His Excellency Governor Nyesom Ezenwo Wike; Commandant Tambuwal also hinted that the NSCDC Commandant General Dr Ahmed Abubakar Audi mni.

in his determination to strengthen the capacity and effective response to emergencies and Disaster management has allotted a new Ambulance to the Command which would be positioned at the Port Harcourt International Airport for effective usage during emergencies.

While wishing the good people of Rivers State a happy Easter celebration Commandant Tambuwal said as a measure against prevention of fire disaster the public is hereby advised to avoid cooking with adulterated petroleum products, shun all acts of stockpiling of premium motor spirit (PMS) popularly called Petrol and drivers should be wary of storing fuel in kegs while traveling before, during and after the Easter celebration.

FIRSTBANK’S FIRSTSME ACCOUNT CONTINUES TO SUPPORT THE GROWTH OF SMEs