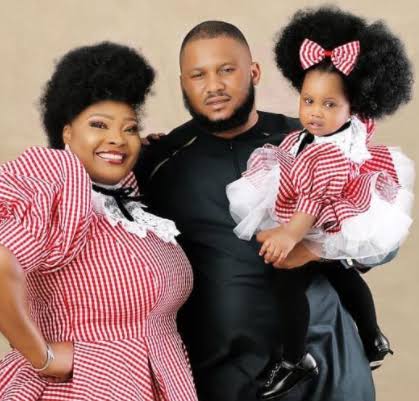 It’s over! The marriage between Nollywood actress, Ronke Odusanya who is also known as Flakky Ididowo and father of her child, Olanrewaju Saheed (Saheed Jago) has packed up like badly arranged cards.

When she got pregnant and had her baby in 2019, many were happy for the actress since she could not marry Fuji musician, Pasuma Alabi.

The joy heightened in August of 2020 when Ronke and Jago celebrated the first birthday of their baby, Fife.

Dressed to the nines and in high spirits, the couple had a photo session with their love child and the social media went viral with these photos.

Of course, everyone expected that wedding bells would follow suit but nothing was heard.

“We thought they were preparing for the wedding until recently when news filtered into town that Ronke was dragging Jago to court over the custody of their baby.

In fact, she was said to have engaged the services of the Minister of States for Labour and Productivity, Mr. Festus Keyamo over this case.

Ronke wants the sole custody of Fife and would not want the presence of Jago at all in their lives,” a source told Reporter.

What could have gone wrong and what happened to the love shared by the duo?

According to an Instagram blogger, Reports, trouble started when Ronke wanted to throw a celebrity-studded party for her baby. She was said to have allegedly collected lump sums from Jago who had to sell one of his four cars to meet her demands.

Though Ronke never held the party, Jago is currently having just a car having sold three to satisfy Ronke’s insatiable demands.

According to the blogger, the demands went a bit higher when the actress wanted the babydaddy to sell his only house and give her the money to build a studio!

“She wants to be like Mercy Aigbe who has a studio and rents equipment for production,” a source revealed.

Fortunately for Jago, his mum, who had the house documents with her, has refused to release anything to her son.

According to report, Jago is lamenting and telling everyone how Ronke wants to strip him naked without a dime to his name.

“He has even attempted suicide. Currently, the custody case is in court and hearing begins on December 1, 2020.”

In response, Ronke put up a message on her wall on Instagram.

Meanwhile, in an interview she granted while the affair was still steaming with love, Ronke Odusanya revealed how they met.

According to her, they met, liked each other and became lovers. Luckily for her is not divorced but a single father of one.

She said, “The good thing about him is that he is not married. Which also means he has never divorced but he has a child. A son who is 5 years old now. I met him and we became partners. If we decide to do anything further, you guys will hear about it. We have been out on two or more occasions.

“You know, It still amazes me on how we became partners because when I met him, I knew he was popular amongst girls. He is the outgoing type so he has a good history with girls around Magodo and Ketu (Laugh). In fact, some girls have called me to ask why I should be with someone like that. I keep wondering how its their business. Why didn’t they ask why he ended up being with me? What makes them think I’m better than him? Is it because he is an extrovert or been with a lot of girls?

“Some even called me to say he is too loud, he can be lousy… but does that make me a better person than him? Have you checked his inward expression and attributes? I remember one time like that that I was dating a popular person. Lots of people were like why are you dating this guy? He isn’t a porch person in quote. But honestly, I dated that person because he was such a good person to me and he took care of me.

There were things I did and he forgave me. Going back to my new partner, I have done lots of things in the past that he heard and forgave me going forward… So the fact that I’m quiet and more reserved or you’ll say private doesn’t make me better than him. Infact, another person said, Ki ni mo wa de be ..Like how did I get involved with him?”

PLAYING THE WAITING GAME WITH GTCO