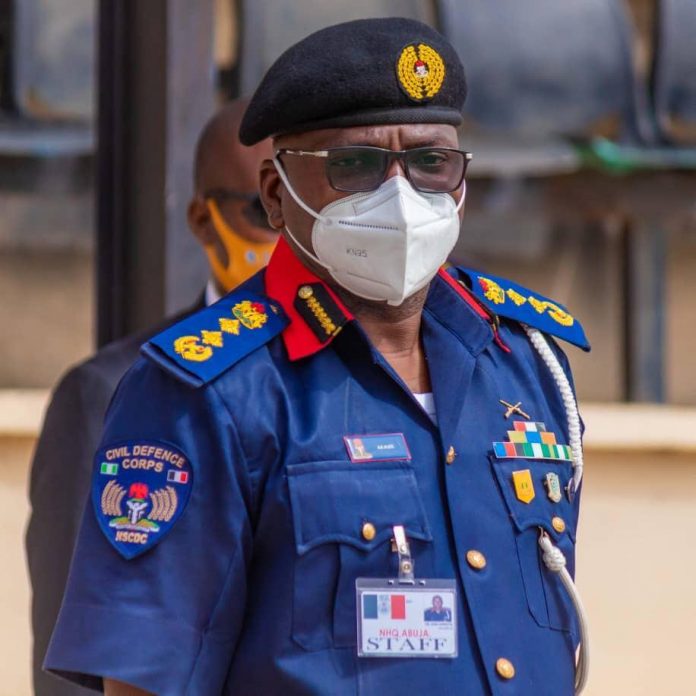 The Commandant General of the Nigeria Security and Civil Defence Corps, CG Ahmed Audi has charged all the Zonal and State Commandants of the corps to brace up their tactical operational activities in securing the nation and safeguarding critical assets and infrastructure.

In a press statement e-signed and released to the National Association of Online Security News Publishers (NAOSNP) by the Corps’ Director of Public Relations, DCC Olusola Odumosu stated that, “In view of the prevailing security situation in the country which has made it imperative to redouble effort towards ensuring effective delivery of the Corps mandate in the enforcement of peace and development of Nigeria, the Commandant General of Nigeria Security and Civil Defence Corps, Ahmed Audi, PhD, mni, has charged all Zonal and State Commandants to function optimally by stepping up their operational activities in securing the nation and safeguarding critical assets and infrastructure.”

“He made this known during the Commandant General’s Conference at the Corps National Headquarters, Abuja, where he emphasized the need to justify the confidence reposed in the Corps by the Government through concerted effort and by making significant impact in the protection of Critical National Assets and Infrastructure, Disaster Management, supervision of Private Guard Companies and the protection of farmers and farmlands.”

According to the CG, the wave, dynamics and sophistication of crisis such as terrorism, banditry, kidnapping, militancy, ethnic agitation, kidnapping, oil bunkering and so on has led to very serious devastation particularly on the economy, hence, the need for the corps to develop strategies that could best address this social menace.

Speaking further, Dr Audi decried the spate of Insecurity in Nigeria which has recently assumed an alarming Asymmetric dimension and affected every facet of Nigerian life, thus, leading to severe unimaginable social consequences across the six geographical regions but particularly the North-East, North Central and South-South.

He gave a stern warning to all zonal and state commandants to resist any attempt by criminals or any group of individuals to unleash terror and destroy the peace of Nigeria.

‘’The only way to justify your existence is to carry out your duties beyond reasonable doubt; our mandates are very clear, so, we must resist any attempt by criminal elements to subvert our peaceful coexistence and be able to show to Nigerians that we are collecting government salaries’’ Audi said.

He directed all the state Commandants to renew and strengthen their anti-vandalism drive by closing down more illegal refineries, arrest and prosecute oil thieves, illegal bunkering suspects and tankers loading, reloading and transloading crude oil across borders.

Reiterating that, safeguarding the nation’s critical infrastructure is a task that must be done as it impacts directly on national prosperity, human capital development and survival of the people. Therefore, any state commandant that perform below expectation would be removed immediately without delay.

The CG reminded the Corps formations of his vision to rejig, reinvigorate, revitalize, reengineer, refocus and reposition the Corps towards building a strong, virile and proactive organization that is knowledge driven, bearing in mind the need to improve on quality of service, productivity, professionalism and operational efficiency.

That one of the focuses of his administration is training and manpower development, bearing in mind the need to enhance the capacity of personnel to effectively deliver on its mandate and every State Command have been mandated to key into this policy.

He promised to introduce career development progression courses for each category of officers which will be the main determinant for their promotion and progression in service.

In his words, the CG said ‘’What this means in essence and as a matter of policy is that you must have passed a prescribed career development course before you can be considered for promotion to the next rank’’.

Dr Audi encouraged the managers of affairs of the Corps to continue to sensitize the public on security consciousness and to seek their cooperation in getting credible information that could help in nipping crime in the bud.