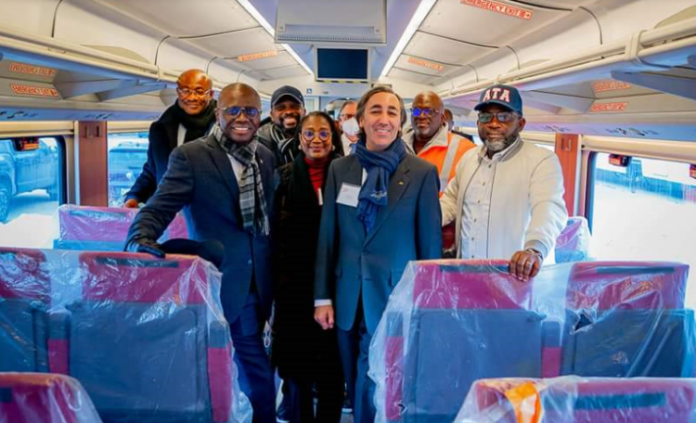 Babajide Sanwo-Olu, the Governor of Lagos State, visited Milwaukee in the United States on Tuesday to finalize the purchase of two of Talgo’s Series 8 train sets for the Red Line rail project in Lagos State.

In a statement by Governor Sanwo-Olu, the two new trains were originally intended to connect Madison and Milwaukee in the United States but are now headed for Lagos State.

The Red Line is a 37 km track with 11 stations, and if launched, will be the first operational metro system in West Africa and the first of its kind in Nigeria.

Governor Sanwo-Olu said the 37km Red Line will connect eight stations and move passengers from Agbado to Oyingbo when completed.

“We have completed the acquisition of the trains and ramping up the completion of the ancillary infrastructure like the train stations.”

“We are irrevocably committed to completing the Red Line Metro rail project by the end of this year and bring a new lease of life to public transportation in Lagos,” Sanwo-Olu said.

The Lagos State Governor anticipates the operation of the first stage of the Red Line to commence by the last quarter of 2022 with a capacity of 500,000 passengers daily.

Upon completion of the second phase, the Red Line will serve the Lagos’ Murtala Muhammed International Airport.

The governor promised Lagos State residents that the Red Line would begin by the last quarter of 2022 or first quarter of 2023, with a capacity of 500,000 passengers daily.

Talgo inc. is a leading manufacturer of trains for long-distance services on conventional mainline infrastructure and operates in several areas of North America, Europe and dozens of Asian countries

Talgo trains operate in 44 countries of the four continents of the world.It has a wide range of push-pull passenger coaches, which are easily accessible

Lagos state has an approximate population of 27 million residents and is the most densely populated city in Africa.

Statistics show that by 2025 Lagos will be one of the five most populous cities in the world.