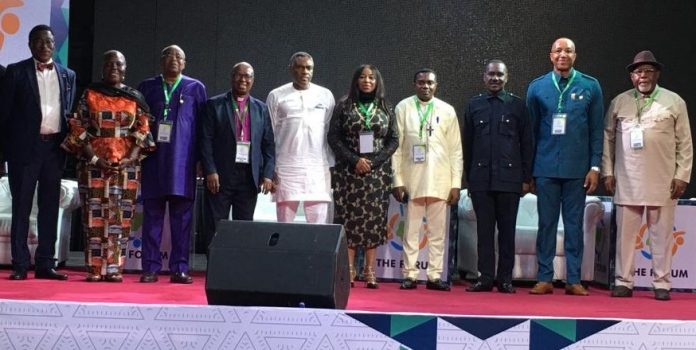 The MD/CEO of Heritage Bank Plc, Ifie Sekibo and other notable Nigerians have
affirmed that the apt way to boost economic prosperity and peace in the country is to
start addressing leadership challenges and insecurity.

Sekibo and other notable Nigerians like the Presidential aspirant of Labour Party, Peter
Obi, Pastor Ituah Ighodalo, Prof. Oyelowo Oyewo, Dr. Victoria Ekhomu and Barrister
Sotonye Inyeinengi-Etomi, during the 2nd Edition 2022 Forum, one-day International
Colloquium organized by The Men’s League of Christ Church Port Harcourt, tagged,
“What do Nigerians Want?”, extensively brainstormed on the kind of leadership the
country needs and how to rescue the country from its current debacle.

Speaking on the topic, “The Economy Nigeria Needs to Break Forth,” Sekibo stressed
that of important to achieving the transformation the country needs, there was urgent
need to address insecurity, which according to him, is the foundation of prosperity, as
no nation can achieve much where the is no peace.

Sekibo, represented by the Divisional Head, Strategy & Business Solutions, Segun
Akanji emphasized that for security purposes, there must be an established functional
and value adding identity system in place.

“On a higher note, I think one of the things that we need to achieve as a country is the
issue of functional and value adding identity management, which is still far away from us,
although, some people know that we have BVN, NIMC and a few other identity capture
systems but they have not been as functional and value adding, like the social security
number that most people in advanced economies carry,” he stated.

Sekibo further explained that to achieve a prosperous economy, Nigeria needs to find
ways and means by policies to build dual circulation economy which thrives on three
pillars.

According to him, we need to focus on building dual circulation economy where we can
expand domestic production and demand by making sure that the masses are
employed.

“We need to make our people are productive and stop putting subsidy in unproductive
zones. When you give subsidy to people with inadequate or no income, they really
cannot add value to the economy, and money has a way of flowing away due to import
of consumables from other countries and because of this, a larger portion of every
consumption or cash given as subsidy gets out of the country,” said Sekibo.

The bank’s helmsman further explained that to expand the domestic production,
government must give the private sector support to drive employment creation,
technology, which is riding on innovation and manufacturing must be in place and, the
population which is an added advantage must be well educated.

He highlighted the need to examine how the country could add value to primary
production for global export, emphasizing on reduction of over dependence on foreign
markets but rather increase local production for export, whilst also increasing demand
on local products.

Sekibo further affirmed that if states could function as proper federating units
and take the lead of the competitive comparative advantages therein, wealth creation
would be achieved that would bring about the desired changes.

The former governor of Anambra state and presidential aspirant, Peter Obi lamented
the huge indebtedness of the country, which he blamed on unproductivity due to the
inimical situation of high unemployment rate resulting to over 80million Nigerians being
jobless.

He blamed the cumulative failure of government over the years on insecurity, failure to
migrate from sharing formula to production formula and lack of will to transform the
power sector and the need to focus and support the micro, small and medium
enterprises (MSMEs).

In his paper titled, “The President Nigeria Needs”, Pastor Ighodalo harped on the need
for leadership change.

He argued that what the country needs now are leaders who have vision and are ready
to sacrifice for the common man, stating, “things must be done differently”.

Ighodalo believed leadership remains the bane of Nigeria’s transformation, stressing that once we get good leadership other things will fall in place.

Prof. Oyewo while speaking on the topic “Restructuring and True Federalism” was of
the view that some responsibilities need to be decentralized like the police, power
provision and railway.

Once there is decentralization, he believes that the state will have less dependence on
the centre, “rebalancing of the constitution in terms of power and security. So, there is
reason for state police.”

Oyewo maintained that regions are closer to the people, thus it will boost security, the
economy and sense of belonging by the populace.

He also identified data and planning as key factors in ensuring that programmes are
tailored towards the people.

ARSENAL FIGHT BACK FROM THREE GOALS DOWN TO DRAW WEST HAM