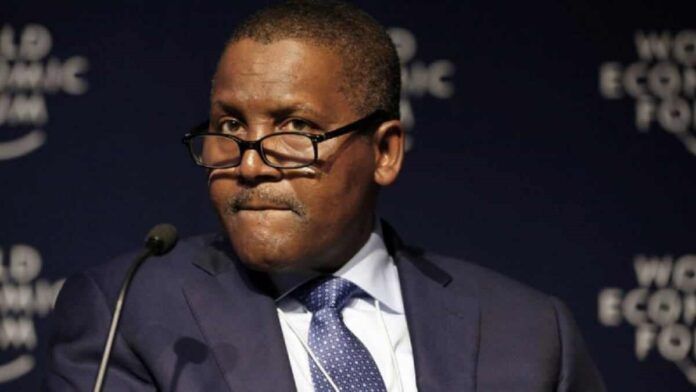 While investment analysts of various grades hinted about the plan, sources added that the cement company appears not to be favourably disposed to the Nigerian Exchange market price.

Valued at about N4 trillion on 17.04 billion outstanding shares, Dangote Cement Plc.’s management recently informed the local bourse plot to continue its 10% share buyback program. The request a slew of equity analysts connect to London listing as a way to protect the company’s valuation.

Due to its size, the Dangote brand and few other bellwethers currently determine direction of the Nigerian stock market swing direction. Some market observers think the local bourse has not been rewarding the best earnings performers, Ademuwagun Yinka, senior analyst at United Capital said stock mispricing is the sole reason for being in the market.

“If stocks are rightly priced, there would be no opportunity for trading. Investors gain from stock mispricing”, he added.

When stock market fails to reward companies’ sterling earnings performance, some investment banker would ordinarily recommend that management should buy back their share from the stock market.

This has been the case in the Nigerian equity space. Some equities analysts maintain that the local bourse has not been rewarding performance. Dangote Cement is currently trading at N230 per share. Vetiva Capital said the company remains BlocMasters in the Nigerian cement space.

DANGCEM released its Q1-2021 reported an impressive 49% year on year jump in the bottom line to ₦90.5 billion, outpaced ₦83.6 billion projected by Vetiva Capital. The earnings company’s outperformance was driven by strong topline growth and supported by impressive cost containment in the quarter.

“Post-lockdown, we had highlighted the sharp recovery in cement demand in Nigeria, supported by rapid capital expenditure disbursement from the Federal Government as well as a mini-resurgence in the Real estate market”, Vetiva said in report..

Accordingly, the sector output expanded 3.8% year on year, substantially ahead of the 1.9% contraction in the total economy. Similarly, analysts at Vetiva Capital said they expect the FG’s continued focus on shoring up transport infrastructure to support volume growth in 2021.

In the Nigeria market, the largest cement company in Africa reported a 22% year on year growth in cement volumes to 4.9 million MT, with 4.8 million MT sold domestically and 0.1 million MT exported to neighbouring countries.

Interestingly, analysts said the surge in domestic demand meant that clinker exports were halted in the quarter. With average revenue per tonne coming in 9% higher due to lower pricing rebates in the period, the Nigerian operations reported a 34% year on year jump in topline to ₦239.7 billion.

The stronger volumes and higher pricing also supported efficiency, with Nigeria EBITDA expanding 53% year on year to a record ₦157.9 billion at a margin of 66%.

Notably, the ramp up of production at the newly commissioned Obajana line 5 supported the improved efficiency. The Nigerian business continues to impress with healthy operation efficiency surging to meet rising demand.

“We expect continued capital expenditure spending by Nigerian Government to further support demand and consequently sales in 2021 and estimate an 18.0 million MT volume.

“While we expect baseline pricing to be maintained, we however forecast a mild reduction in average revenue per tonne in the second-half of the year as we anticipate season three of “Bag of Goodies” promo”, analysts said.

Last year, Dangote Cement made first foray into trillion naira in revenue. For 2021, Vetiva analysts forecasted that the company’s domestic sales will grow 20% to N862.1 billion.

“Even amidst rising core inflation numbers, we expect cost efficiency to be maintained on account of surging volumes, with a minor dip in rain affected Q3”.

Also, analysts  forecast a 32% year on year jump in Nigerian earnings before interest and tax payment including consideration for non-cash flow depreciation and amortisation  to ₦558.1 billion, translating to a 65% margin.

Giving insight on the share buyback, Damilare Asimiyu, a senior analyst at Afrinvest Limited told MarketForces Africa that the truth is, a publicly listed company can at any time buy-back part of the its publicly floated shares so long its shareholders approved it and the free float that will be left after the buy-back is not less than 20% or worth less than N40 billion.

“Mostly, what drives companies to trigger buy-back clause is when they perceive the market is underpricing their shares. Companies especially those with international reputation will not want their shares underpriced significantly as it can affect their rating and chances of credit raising in the international capital market.

“I guess this is exactly what the Dangote Cement group is reacting to as the general dynamics of the Nigerian equity market in the last 3 – 5yrs has not bode well for their share price despite delivering impressive earnings numbers year-in-year out”, Afrinvest analyst said.

Asimiyu added that in the short term, share price may not really appreciate especially if the unit to buy-back is small and in tranches, but in the medium to long term, if the company keeps delivering decent earnings numbers, share price will gain significantly as demand pressure for the little volume available will drive price.

“Most likely, the company feels the general performance of the stock market is undermining their earnings performance, which is not good for them especially when seeking to raise equity funding in the diaspora”,

A source at WSTC Financial Service said on why the share buyback, there has been a stipulation about a possible London listing, which many believe is informing the buyback program.

“But I see the program as a way of returning value to the shareholders. Though one may wonder why buyback when the stock trades at a premium to its book value? That leaves room for speculation on the management true intent”, analyst said.

How the stock price will be affected? He said in the short term, it is positive for market sentiment.

“The program is likely to provide psychological support for the stock. For instance, the first back buy was done around N240. The market may be expecting something similar within that range now. The stock price has been trending up since the corporate action”, he added.

Explaining further, he said in the medium term, earnings per share is likely to rise even further due to lower outstanding shares. This will support prices in the midterm in terms of attractive valuation multiples. In the long run, it still bodes well for the stock price provided that earnings continue to grow.

Speaking to Dangote stock performance, source at WSTC Financial Services said, “If you look at the price trend over years, the stock has hovered around N230 despite the significant growth in revenue and the company’s profitability.

“The market seems not to have rewarded the company’s effort. It either implies that the stock has been overvalued and is now closing up to its fair value or the risk inherent in the business has been rising with the increased performance thereby netting each other off.

“I expect the dividend per share (DPS) to grow going forward. The buyback program will lower the shares outstanding. Even if the company decides to maintain the overall company’s dividend as in the previous year, DPS will rise due to the lower outstanding shares which will also support valuation for the stock”.

He stretched further that stock market prices stocks based on three fundamentals: the broad economy, the industry prospect and individual company’s performance and investors’ confidence.

“If any of these is missing, stock prices will hardly mirror their performances. So, while some companies may outperform the broader economy in the short run, they will eventually converge in the mid to long term because they can’t beat the system.

“And investors value stocks based on a long-term view of the economy, which has impacted pricing for stocks”, WSTC source told MarketForces Africa.

In his view, Gbolahan Ologunro, senior analyst at Cordros capital said the most probable explanation is that management feels that a share buyback programme will make the company more attractive in the near term and at the same time, positioning it for long term growth.

Ologunro said in the short term, the stock is expected to remain well in bid as investors scramble for it due to expected upward repricing in the market.

“It is too early to examine how this will affect the dividend capacity of the firm particularly in the short term. If the size of the tranches are not significant, cash balance may not be drained which would mean that dividend will not be affected.

“However, if we look beyond the short term, the experience of what happens in other climes suggests the company may be more conservative with dividend payments”, he added.

Ola Ogedengbe, stock market expert explained that investors and directors have their reasons for share bay back, but more often than not, a company with the potential of growth and with few stakeholders with large percentage of the total outstanding shares, may want to re-consolidate holdings and reduce number of stakeholders.

“When a company needed capital for expansion approached the market and raise d fund and started to do well with good profit and reserves to run, then share buyback comes in to say that now we can run without some excess funds”, he explained.

He stock price during the buyback has the tendency to go up but then it could be arranged with some bulk holders to manage price.

Ogedengbe added that after the buy back there should be stability or a lull hence the company would not be releasing shares to the market for sale. That, in a long run could result to scarcity and the higher demand and higher price.

On reason why the cement company seeks to buy its share back from the stock market, United Capital analyst Yinka Ademuwagun said there are speculations for the programme.

He said, one of the speculation is that Dangote Cement is trying to list on London Stock Exchange. Ademuwagun said to do that, the price that the company will be listing will be derived from the Nigerian Exchange market price.

“There shouldn’t be much disparity between home price and LSE price to avoid arbitrage – that is, buying at either market at low price and sell as where price is higher”, United Capital analyst said.

He explained that the arbitrage opportunity must be canceled such that there will be zero return from buying in one market and sell in other.

“The share buyback has a link to the LSE Listing. The position out there is that the company is trying to prop up its share price in order to get favourable valuation when it finally lists”, Ademuwagun said.

Analyst also explain that the company share price will be affected in two ways. In the short term, it is going to be positive because share buyback is based on market price.

“Dangote Cement did this in 2020, this is not the first time. The stock will become expensive in the short term”, United Capital Ademuwagun told MarketForces Africa.

He said in the long term, there will be fewer Dangote Cement stock out there. Thus, it will be hard to sell or buy, which means reduced volatility.

Analysts maintain view that upswing and downswing will reduce, which is expected to lead to a more stable price on the local bourse.

In the face of LSE listing, the company may not release new issue but the amount buy back can be released in London listing.

United Capital analyst Ademuwagun said this should not impact dividend per share since it does not affect financial performance of the company – it is unlikely to impact dividend.

In essence, the programme is not expected to impact dividend payment negatively. However, analysts believe that there is potential it could be increased instead.

“It is safe to say that Dangote is not happy with stock market valuation of Dangote Cement. Share buyback is the company’s way to prop up share price.

PETROL NOW TO SELL FOR N212 IN NIGERIA-PPPRA