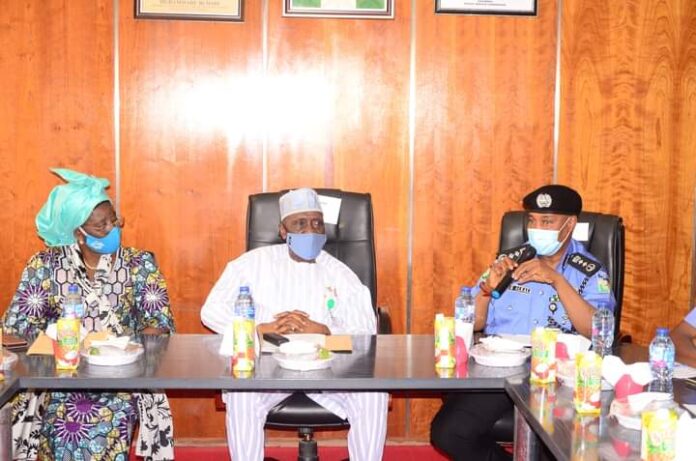 The Police Service Commission (PSC) on Wednesday played host to the Acting Inspector General of Police, Usman Baba Alkali and the Management team of the Nigeria Police Force with Commission’s Chairman, Alhaji Musiliu Smith calling for a harmonious and productive working relationship between the two government Agencies in the interest of the nation.

The retired Inspector General of Police, who led the Commission’s Management team to receive the visitors, said the two Agencies need each other and must work together to solve the nation’s security challenges.

Alhaji Smith who prayed for a successful tenure of office for the acting Inspector General of Police assured him of the Commission’s guidance and support but noted that the IGP should listen and carry his management team along in the discharge of his duties.

“You should encourage and benefit from team work with your management team; let them be free to advise you; listen to them” he told the acting IGP adding that Members of the Management team should not be afraid to advise him but should also not mislead him. “Be truthful to the IGP, give him his due respect and the Nigeria Police will make a lot of progress.

He decried the proliferation of investigative units in the Nigeria Police Force and demanded that the acting IGP should quickly look into it to save the Police Force of the huge embarrassments these Units bring to the establishment.

He said there must be proper and close monitoring of Police investigative units to stem the atrocities its officials commit in the line of duty stressing the need to quickly treat cases of misconduct by these Officers so that those found wanting are brought to book.

It is this set of Officers that have continued to damage the image of the Force and you should quickly get these bad eggs out of the Force. You should also ensure sanity among the ranks and file and even the officers.

The PSC Chairman said training should also be one of the priority programmes of the acting IGP, including building strong intelligence base so as to detect and control crime. He called for the revival of the Police Detective College in Enugu so that it will provide the required platform for training in intelligence gathering.

Alhaji Smith spoke on the need for Divisional Police Officers (DPO) to return to their responsibilities of doing visiting rounds” and also emphasised the need for revival of workshops and communication in our Police Commands.

Acting IGP Baba said he was in the Commission to announce that there is a new “sheriff” in town and to express the loyalty and cooperation of the Nigeria Police Force to the Police Service Commission.

He implored the Commission to go beyond recruitment and promotion and assert its authority to make the Nigeria Police Force better. He noted that the Commission should go ahead to produce the Police Force the nation needs using the reward and punishment procedure adding that the area of discipline has been neglected in the Force.

The new police boss said the Force will be happy to work with products of the Commission’s recruitment and said the 35 Police training schools in the country should be made to be busy with all year programmes. He promised to work closely with the Commission to give the nation an ideal and vibrant Police Force.

MAKINDE TO IMPLEMENT MINI-GRID SCHEME FOR RURAL COMMUNITIES IN OYO