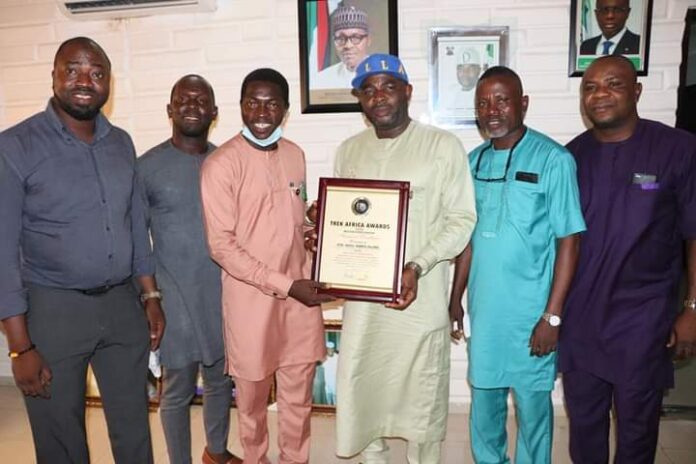 Somolu is the pride of Lagos – Council Boss, Dullar

The Executive Chairman, Somolu Local Government area of Lagos State, Hon. Abdul Hamed Salawu has said that Somolu is the pride of Lagos state and its non-negotiable.

Salawu, popularly called Dullar told newsmen on Thursday when the editorial team of Trek Africa Newspaper paid him a courtesy visit at his office to present him an award recently won at the seventh (7th) edition of Trek Africa National Discourse and Awards tagged: “Lofty Heights Attain: Nigeria’s Call Beyond Covid-19” as he received Trek Africa Council Chairman of the Year 2020.

Dullar making point during an interview with Trek Africa Newspaper

No doubt Dullar has done so much in Somolu especially in the area of healthcare, road, education, youth empowerment and his amiable support for the elderly people.
“I grew up in this community and before now Somolu is known for thugs and all that but it’s been transformed. The youths, road everything is transformed.

Our healthcare is top notch, education, and we’re still doing more. In the next two weeks, the Lagos State Governor, Mr. Babajide Sanwo-Olu will commission a new health center in this local government. We have successfully constructed 32 roads, state standard road not sharpy roads with interlock, well standard drainage system as well. I tell you that Somolu is the pride of Lagos” he said.

As the chairman committee on security for APC at the just conducted Lagos East Senatorial district bye-election, when asked how he was able to ensure peaceful election in the district, he said: “It’s not magic, I ensure that I engage good people that know what security is all about and beside we engaged the youths, empowered them, took good care of them so where will crisis come from when they are well cared for. That’s how we got a peaceful election. This is just a test run and it worked.

Normally we don’t always engage all the youths, we just give them something and said go but now we know how better and it worked”.
Abdul Hamed bags the best chairman of Lagos award as a result of monthly welfare package of food items to the elderly people in his local government.

The food items were delivered to the elderly people who are within the ages of 60 years and above in their various homes irrespective of religion’s religions, political, ethnic or social affiliation.

“Apart from the food items for the elderly people on a monthly basis, 20 young with N100,000 each every month and over 100 people had benefited from that. Sewing machines and cooking gas cylinders were also presented to young artisans in the monthly empowerment too” he said.

The award was co-presented to him by Samson Oki, Publisher, Trek Africa Newspaper, Chief Press Secretary of Somolu Local Government Area of Lagos, Oseni Owolabi Ajimomuya and other council executives.

WILL PRIMATE AYODELE’S WARNINGS ON KIDNAPPING IN ASO ROCK COME TO...