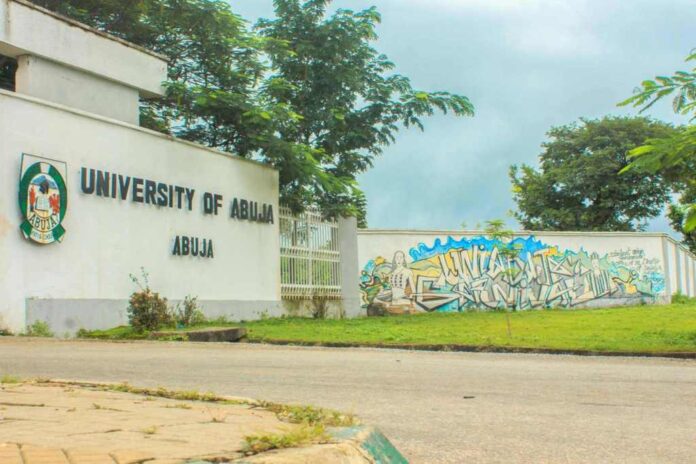 THE Senior Staff Association of Nigeria Universities and Non-Academic Staff Union, NASU, in the University of Abuja, staged a peaceful protest Tuesday, to draw attention to what they referred to as federal government’s injustice to them.

The protesters listed irregularities in the implementation of the Integrated Payroll and Personnel Information System, IPPIS and distribution of the earned allowances as two key issues that informed their action.

The university unions speaking during the pretest held at the entrance of the University of Abuja demanded that government pays them their minimum wage as promised, saying the payment must be in conformity with what workers in ministries are being paid since 2019.

One of the protesters identified as Sadiat Hassan, NASU’s treasurer in UNIABUJA, Sadiat Hassan, speaking, threatened that the unions will proceed on indefinite industrial action if government fail to address issues that compelled them to come for the protest.

“We are protesting against the irregularities in IPPIS payment and demanding the renegotiation of our 2009 agreement which has been long overdue.

“We are also protesting against the non-payment of our earned allowances and injustice that was done by the Federal Government in the distribution of the earned allowances because they gave a particular union 75 per cent and the other unions 25 per cent.

“This is against the agreement held in October (last year) that the money was for all the unions. So, we expect them to do justice to everybody because this is earned allowances.

“We earn our allowances just like every other union. So, we want justice. We also want the government to pay us our minimum wage as promised as they have paid other ministries since 2019.

“That is why we are communicating with them that they should give us our rights because Universities or tertiary institutions in Nigeria do not comprise only the teaching staff alone.

“There are also other administrative staff that are doing very relevant jobs in various offices. So, we shouldn’t be taken for granted because, without our services, the University system cannot perform because we know that we are also important.

“We are also law-abiding citizens; that is why we decided to go with them when they came for IPPIS. Now, we have enrolled, our problems continue, in fact, more than even what we are having before. That is why we are calling on them now to address these irregularities or else we will be ready to down tools in our various institutions,” she said.

LAGOS TO GO AHEAD WITH COLLECTION OF VAT DESPITE APPEAL COURT...