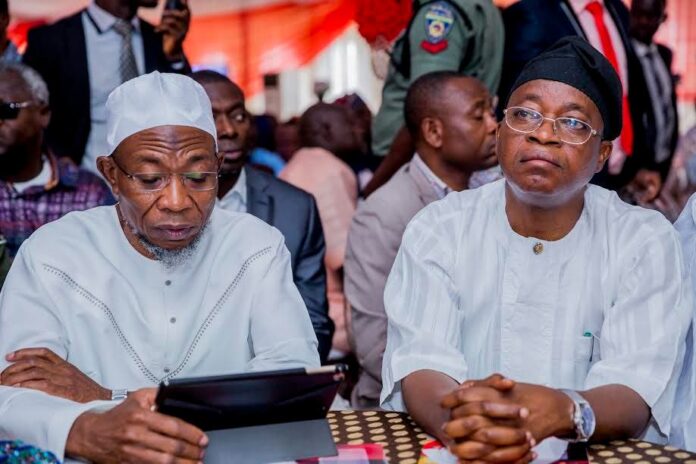 NATIONAL Leader of the All Progressives Congress, APC, Asiwaju Bola Tinubu, and former Interim National Chairman of the party, Chief Bisi Akande, yesterday, waded into the rift between Governor Adegboyega Oyetola of Osun State and his predecessor, Rauf Aregbesola.

The meeting, Report gathered, which was at the behest of Akande, started in the morning between Oyetola, Aregbesola and Akande, before Tinubu arrived at the venue around noon.

The four leaders emerged from the closed-door meeting around 4 pm and refused to address journalists who had been waiting for the outcome.

Oyetola and Aregbesola drove out in the Governor’s official vehicle, while Tinubu and Akande left through one of the two choppers stationed opposite the building.

Report, gathered that the Governor and his predecessor could not reach a compromise, which was the reason journalists were not briefed after the meeting.

On the entourage of Aregbesola was one of his Special Advisers, Bola Ilori; former Chairman of the National Union of Road Transport Union, NURTW, in Lagos and State Commanders of Para military outfit in the state.

The Interior Minister, however, disclosed on his Twitter handle that he was in the state to begin a Stakeholders’ Engagement Meeting with different stakeholders in the state as directed by President Muhammadu Buhari.

Aregbesola said: “Our entourage paid a courtesy visit to our leader and father, Baba Bisi Akande, alongside Governor of Osun State, Alhaji Gboyega Oyetola in Ila Orangun. Baba advised us on EndSARS and insecurity amongst other issues.”

But a source confided in  Reporter that the meeting ended in a deadlock as Oyetola and his predecessor did not compromise their positions.

Also, some of the Minister’s associates said it was not yet time for settlement.

Speaking with journalists after the meeting, Akande’s spokesperson, Lani Baderinwa said the visit was nothing unusual, adding that it was part of the civic engagement of the Minister as directed by the President.

Baderinwa said: “The former governor of Osun, who is now the Minister of Interior, was here as part of our civic engagements as directed by the President not too long ago. He could not have done it alone; he has to come with the current Governor. Whatever is the core of their discussion is not opene to me.

“Incidentally, Asiwaju as usual who comes around randomly without anybody knowing he was around. That was exactly what happened. He joined them at the meeting and I believe that as the National Leader of the party, he has a stake in the whole scenario, therefore; there was nothing unusual about him.

“I am not aware of any problem between the two of them. It has always been speculations in the media that they are at loggerheads with each other.”