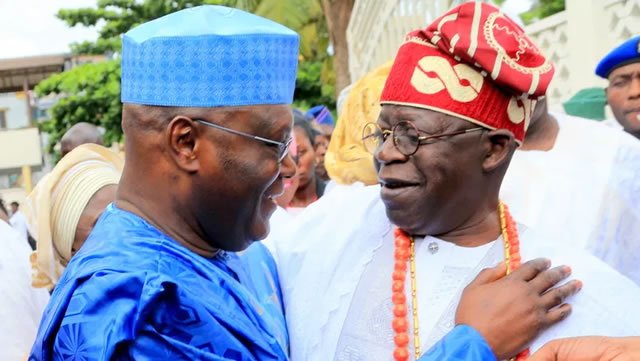 There were strong indications that both the presidential candidates of the All Progressives Congress, Asiwaju Bola Tinubu and the Peoples Democratic Party, Atiku Abubakar,  have started searching for their running mates ahead of the Independent National Electoral Commission’s June 17 deadline for parties to submit their candidates’ lists.

This was disclosed on Thursday to our analysts by sources close to the two candidates, who preferred anonymity.

According to the sources, while Tinubu is looking towards the North East to pick his running mate, Atiku is expected to come down to the South to pick his Vice President.

A source in Tinubu’s camp, who is among his media team, said, “Tinubu already had an arrangement with the APC governors that if he emerged the candidate of the party, the governors would decide the person to pick.

“Though, the Vice-President can come from any region and religion but we are looking towards North East. The PGF is at liberty to pick. Up till now, we are all aware that Atiku has not chosen a VP. Yet, he was elected before him. But in our own case, it is a party affair.

“The party leaders will look at the chances and decide how they will balance a Muslim from the South. That is how it is done. I cannot circumvent the party. The Governor Atiku Bagudu-led PGF has the task to pick a competent deputy for him.”

Another source from Atiku’s camp explained that being from the Northeast, it is expected that the PDP vice presidential candidate will come from the Southern part of the country in order to balance the power equation. But the question is, which part of the South will the candidate come from?

He said, “Contrary to the arguments of some critics that the former vice president will choose a running mate from the South-South considering that all the states in the zone are currently controlled by the PDP, the reverse will happen.

“The PDP stands a better chance if it goes to Southeast, despite the fact that the zone currently has only two PDP governors. The thinking is that more than 90% of the South East has sympathy for the PDP since the beginning of the Fourth Republic.

“Beyond that, however, many agree that historically, the South East has contributed more than any other zone in the life of the PDP as a political party in Nigeria today.”

Tinubu joined Atiku in the 2023 Presidential race when he emerged as the APC candidate with 1,271 votes on Wednesday at the Eagle Square, Abuja, according to report.

The former governor of Lagos had been declared the winner of the 2023 APC primary as he accumulated far more votes than the other contestants.