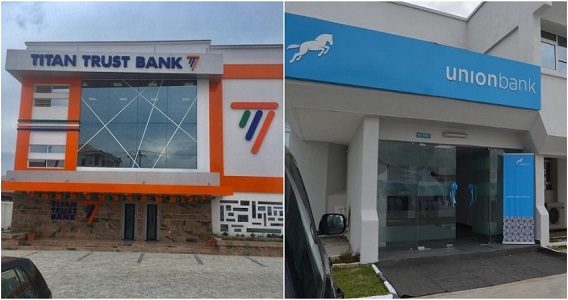 Union Bank Plc on Thursday, June 2, said it had completed its core investors’ sale of a majority shareholding to Titan Trust Bank Ltd., a subsidiary of TGI Group.

In a statement signed by Somuyiwa Sonubi, the bank’s Company Secretary, made available to the Nigerian Exchange Ltd., in Lagos; the Union Bank said there was a board change that resulted in the resignation of directors.

This, it added, subsequently led to the retirement of the directors from its Board, while other new ones were appointed.

The statement said, “Union Bank hereby notifies Nigerian Exchange Limited (NGX), the Securities & Exchange Commission, and members of the public of the completion of the transaction under the Share Sale and Purchase Agreement (SSPA).”

It said it effectively transferred 93.41per cent of Union Bank’s issued share capital to TTB.

“Consequently, in compliance with NGX, Rulebook and the Amendments to the Listing Rules; Union Bank hereby notifies NGX, our esteemed stakeholders and the investing public of the following.

“The Bank, hereby, notifies NGX that with the completion of the transaction; TGI Group, parent of TTB, now becomes the majority shareholder and core investor in Union Bank.

“Consequently, UBUK is not included in the transaction with Titan Trust Bank,” said the statement.

The bank also notified the NGX of the retirement of directors, the Chief Executive Officer, Mr Emeka Okonkwo, with effective from June 2.