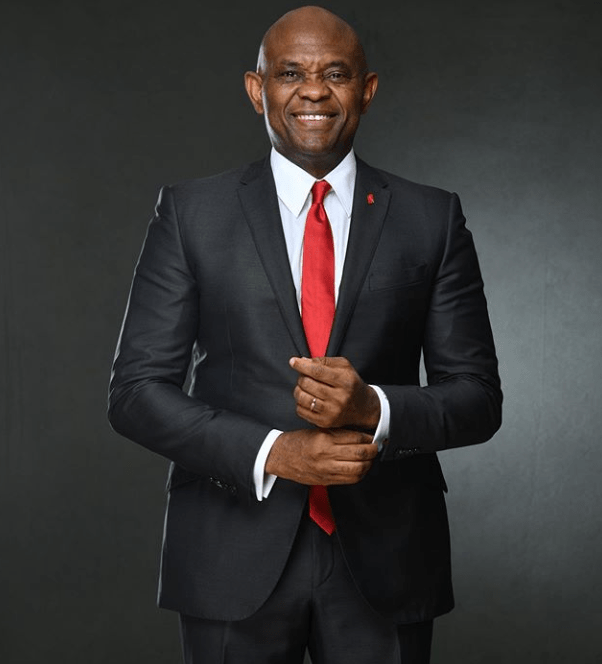 A recent Instagram post of Tony Elumelu displaying some yoga moves generated a lot of comments like “the fittest billionaire in Nigeria,” “Billionaire workout routine,” “fitness goals” and the likes.

There is a lot more to the Delta-born entrepreneur than taking a stroll pose with his black suit and signature red socks; making lots of money, and giving back to the society through his foundation.

It makes a lot more interesting gist when you consider that the man whose name now seems synonymous with a tier-one bank, started his banking career by applying for a role he was not qualified for.

How his banking career started

Anthony Onyemaechi Elumelu was born in Jos, Plateau State, Nigeria on 22 March, 1963, although he is a native of Onicha-Ukwu in Aniocha North Local government area of Delta State.

It was at about this time that Allstates Trust Bank ran a job advertisement in the papers, stipulating a minimum of 2:1 degree (Second Class, upper division) which Elumelu did not have.

Elumelu recalled in one of his posts that part of his cover letter read, “I know I may not have met the qualifying criteria for the advertised roles, but I am intelligent, driven, ambitious and I will make the bank proud.

My 2:2 degree does not demonstrate the full extent of my intelligence and ability, and I know I can do so much more.”

His application was reviewed by the Chairman/CEO of the bank, who decided to give him a chance to prove his worth. He was shortlisted and went through several other interviews and tests, at the end of which came the good news. He was placed as an entry-level analyst and resumed with the bank.

True to his word, Elumelu indeed proved that he could ‘do so much more’. Within a year, he went from being an entry-level analyst to becoming the youngest branch manager, being just 27 years old at the time.

Not only was this a first for him, it became a launchpad to catapult him into series of leadership positions and roles. It is an experience that Elumelu has often recounted when explaining how luck can play a critical role in one’s success story.

“I was hard-working, energetic, creative and prioritised getting things done, but it was also good fortune that my bosses Toyin Akin-Johnson and Ebitimi Banigo took notice, and then, believed in me.

They took a chance on me by appointing me as branch manager after an incredibly short time in the bank. They recognised in me the raw materials needed to make a good leader and were prepared to invest in me and my ability.

My rise to Branch Manager within a short period is a great story but I know in my heart, I was lucky, as well as deserving,” he narrated.

His reputation had a major shift in 1997 when he led a group of small investors to take over a nearly bankrupt commercial bank in Lagos – Standard Trust Bank – and then turned the fortunes of the bank around. He made it into one of the top players in the banking sector, strong enough to weather the storms of the consolidation period.

In 2005, he led a merger which saw him acquire United Bank for Africa (UBA) under his bank, while choosing to retain the name UBA. It was a move that many did not see coming, but the dexterous and intelligent entrepreneur executed it without a hitch.

Within the next five years, he drove the bank from being a single-country bank to having a presence in 19 African countries with over 7 million customers at the time.

Elumelu left his position as Chief Executive Officer (CEO) of UBA in 2010, to pursue other interests, but UBA has continued to break records since then and has become a tier-one bank.

In 2010, after leaving UBA, he started Heirs Holdings and the Tony Elumelu Foundation (TEF).

Heirs Holdings is a family-owned investment company with a portfolio that cuts across the power, financial services, oil and gas, hospitality, real estate, and health care sectors. The company operates in twenty three countries worldwide.

Explaining the intention behind the foundation, Elumelu said, “I promised to leverage the success I have enjoyed, to spread luck and hope, provide opportunities and to empower the next generation of African entrepreneurs to succeed.

Without luck in my early career, I would not be the man that I am today. I am a leader and philanthropist today because I encountered people who gave me a chance early in my career. It has been a lifetime goal to pay this forward in a transformative and impactful way.”

TEF is not only democratising access to opportunities for African entrepreneurs, the foundation is creating a digital ecosystem where these entrepreneurs are mentored, trained and funded.

Elumelu also chairs one of Nigeria’s largest quoted conglomerates, Transcorp, which has subsidiaries like Transcorp Power, and Transcorp Hotels Plc.

The 2020 TIME100 named Tony Onyemaechi Elumelu as one of Africa’s leading investors and philanthropists, and he was one of only four Africans on the 2020 list of 100 most influential people in the world.

He bagged the CGECI Academy’s Lifetime Achievement Award in 2016, and was listed among Africa’s 20 most powerful people by Forbes magazine in 2012. Elumelu also got the 2013 Leadership Award in Business and Philanthropy from the AAI.

Elumelu has written several enlightening pieces and delivered both lectures and speeches, mostly along the lines of entrepreneurship and promoting enterprise.

In line with his interests, there are other positions where Elumelu serves. Some of them include the USAID’s Private Capital Group for Africa (PCGA) Partners Forum; member on the Nigerian President’s Agricultural Transformation Implementation Council (ATIC); Co-Chair of the Aspen Institute Dialogue Series on Global Food Security; and one of the co-chairs of the 26th World Economic Forum on Africa in Kigali, Rwanda.

It would be difficult to summarise an interesting and multi-dimensional entrepreneur like Tony Elumelu into a single article, but this is as close as it gets.

LIGHT UP YOUR WEEKEND WITH THE GUINNESS BRIGHT HOUSE PARTY |...