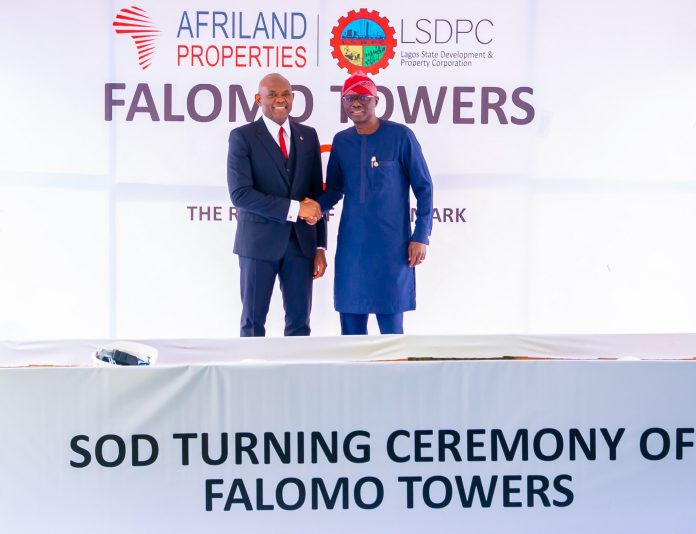 Afriland Properties has signed a joint redevelopment partnership with the Lagos State Development and Property Corporation (LSDPC) to turn the former Falomo Shopping Complex to a premium sky-high real estate.

This was disclosed by Afriland Properties via a video at the sod turning ceremony and shared with journalist on Friday.

The project is expected to enhance the socio-economic outlook of the neighbourhood, as it is a major urban renewal project that will restore the aesthetic landscape of Falomo, the commercial suburb of Ikoyi in the state.

Afriland Properties Plc is a subsidiary of Heir Holdings, owned by the foremost entrepreneur and banker, Mr. Tony Elumelu.

“For the private sector to do well, the political leadership must create the right environment. Lagos has set the pace in this direction. This partnership is a celebration of dialogue and this makes Lagos remain the most hospitable environment for investors.”

Sanwo-Olu, at the sod turning ceremony held at the project site, said the construction flag-off ended a decade-long discussion with the developer to revive the project and build iconic towers that would turn around the fallow land for the benefit of the public.

He said: “This is a phenomenal project that will bring back the lost ambience of Ikoyi. When this partnership was initiated 10 years ago, I was the Managing Director of LSDPC. It is interesting to note that we’ve all gone through arbitration but we didn’t throw a wrong punch.

We agreed this project must not be thrown away. Today we are making a transaction that is bigger and better than what was initially proposed 10 years ago.

“This testifies to the uniqueness of public and private sectors in ensuring things can be made a lot better when we sit and agree. This is a clear example of what Public Private Partnership (PPP) model is out to achieve when partnerships and collaborations are pursued and implemented with seriousness.

When we put our minds of possibilities to ideas, great things happen. This aptly describes the story of today’s flag-off of construction of Falomo Towers.”

The Governor added that the State Government would remain committed to ensuring the investors get full value for their investments while promising to continue to pursue business environment reforms, including automation of land and property records to scale up transparency and efficiency that catalyse sustainable investments.

In March 2021, Chairman of Heirs Holding, Elumelu, unveiled plans to further transform the Central Business District of Lagos with the construction of “Falomo Mall”.

Taking to Twitter, the Nigerian businessman shared design images of the proposed edifice, which is also intended to house the Transcorp Hotel, Lagos, with 600 rooms. Although he did not disclose when construction works will begin, Elumelu urged Nigerians to be expectant.

Elumelu had stated that it was a thing of joy to watch his company drive the transformation of the Central Business District. According to him, Afriland Towers is now located on a popular landmark which was previously known as Raymond House.

Elumelu also recalled how, as a young banker, he used to view Raymond House as the very symbol of Nigeria’s “vibrant financial sector”. Perhaps, this explains why the building served as the first headquarters of United Bank for Africa (UBA) Plc which Elumelu once headed as CEO, and now serves as its Chairman.

ASUU EXTENDS STRIKE BY 2 MONTHS AS FG INSISTS IT HAS...