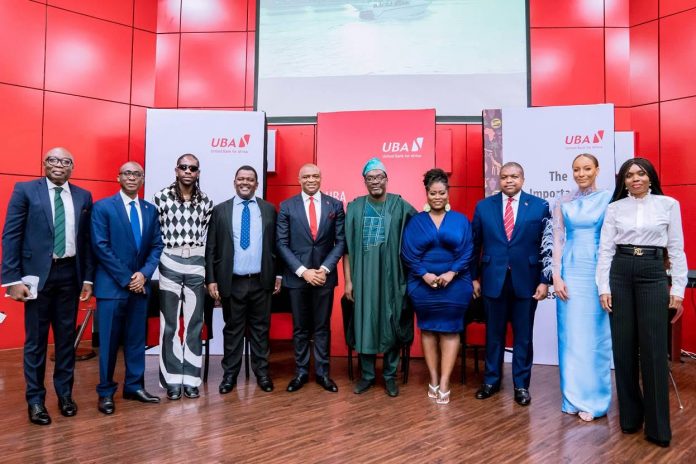 This is to change the narrative and encourage Africans home and abroad to be patriotic and embrace their inherent Africanism.

It was a potpourri of culture, costumes, colours, intriguing entertainment, and insightful discourses at the African-inspired decor concept to mark the 4th Africa Day at the UBA House Marina in Lagos State.

A troupe of dancers and actors represented a few countries in Africa – Nigeria, Ghana, Senegal, Zimbabwe, Namibia, South Africa among others.

Their energetic and lithe entertainment, ebullient music serenaded the audience from the entrance of the building to its doorways through to the Tony Elumelu Amphitheater hall. Their overall performances diffused good vibes and earned them a six-million dollars clap ovation.

Today, Africa has unarguably positioned herself as the second largest continent in the world. It remains the only continent of the seven that was evidently bequeathed with the most colourful and distinctively diverse culture appreciated across the globe.

From her aesthetic art works, ethnic costumes, expressive dances, mind-blowing plethora of languages, amazing dishes, tourists attractions, and wildlife among others, Africa is seen as a world power that is yet to explore.

It is, therefore, to proudly project her cultural heritage that the United Bank for Africa (UBA) Plc hosted the 4th Africa Day conversations in Lagos to commemorate this year’s Africa Day. Part of its aim was for dignitaries to map out lasting solutions to persisting challenges in the continent.

The UBA Africa Conversations was established in May 2019 as a hallmark initiative in a series of celebrations for Africa Day.

The conversations provided a platform for African and global audiences to connect with global thought leaders both in the private and public sectors, on their African journey. This was all in a quest to change the narrative on Africa from desolate to successful.

Themed, “The Importance of Reflecting our African Culture in Global Success Stories”, the day underscored the tremendous shift in Africa’s cultural influence – from Afrobeat to African films; Big African fashion labels and African authors; entertainment and culture. According to UBA, Africa is creating a positive impact globally.

According to the Deputy Managing Director, UBA, Oliver Alawuba, “It is from Africa that UBA Africa was set up,” he conceded, adding that UBA has invested so much in Africa. “We are in 20 African countries and four countries outside Africa. Our focus has always been on driving investments into Africa, through conversations such as this.”

Taking a cue from the MD, the Namibian High Commissioner to Nigeria, Ambassador Humphrey Desmond Geiseb, talked about how globalisation has been good for Africa. “Of course, there are still some gaps. There are still a lot of things about Africa that are not known. And I believe that culture and arts can help to get it right for us.”

He added that UBA’s foray as an African bank into the US is a testament to this fact. This is as Geiseb envisaged that by 2063, Africa should have become a united and prosperous continent, and have the ability to take care of its own development.

In the cases of export and import, the ambassador and panelist at the conversations insisted that Africa should export more and add values to her own product. In his words, “The free trade will inculcate an environment where Africans trade more and enjoy intra-trade opportunities.

“We need to master the 2063 African agenda so that by then we are all in a better place to maximise different situations and remain united.”

He also emphasised the need for governments in each country to give a lot of consideration so the commitment to the African agenda is laudable. Adding, he encouraged that as Africans, “we should be proud of who we are, where we’ve come from and the days ahead”.

Giving his presentation, Ayorinde highlighted, “As Africans, we are at the point where no one denigrates African culture anymore. Indeed there is still a gap, but we are bridging it.” He, however, pointed out that the liberalisation of the media and digital content is helping to improve the African narrative.

Forson, on the other hand, commended UBA’s contribution towards transforming the African tale. She enthused about how African culture is now more widely accepted around the world. The actress expressed, “It is great to see a bank like UBA being intentional about promoting Africa. Now, the world gets to see more of us, because we have started to tell our own stories.

On his part, Ize, said that the continent holds a lot of potential that Africans are yet to tap into. “Africa is our home, our culture, and we have to do everything to preserve our culture,” he told the audience during the panel session moderated by television anchor and journalist, Laila Salami-Johnson.

Speaking on the need for collaboration to boost the continent’s fortunes during his keynote address, Ndour insisted that young people in Africa have a lot of questions and “We have to listen to them and see how together we can be a solution for Africa. We need to understand that there is a lot to do. Together we can make it”.

Since Saturday 25th May 1963, Africa Day has been celebrated across the continent and worldwide. The day was inaugurated by the Organisation of African Unity (OAU) in celebration of the unity, diversity and beauty of Africa and its people.

Consequently, as one of Africa’s leading financial services institutions, with a pan-African footprint spanning 20 African countries and globally in the US, UK, the United Arab Emirates and France, UBA says it’s fully committed to unifying Africa. It also continues to lead the narrative focused on the development, growth, and unity of Africa.

With presence in New York, London, Paris, and an operating license in Dubai, UBA is connecting people and businesses across Africa through retail; commercial and corporate banking; innovative cross-border payments and remittances; trade finance and ancillary banking services. UBA is Africa’s global bank.

Quote It is great to see a bank like UBA being intentional about promoting Africa. Now, the world gets to see more of us, because we have started to tell our own stories…the continent holds a lot of potential that Africans are yet to tap into. Africa is our home, our culture, and we have to do everything to preserve our culture

UNION BANK IS PROUD TO LEAD THE CHARGE FOR SOCIAL IMPACT…..MD, EMEKA EMUWA

STARTLING REVELATION: THE PROBLEM OF DRUGS IN NIGERIA IS ENORMOUS, WE PROBABLY DISCLOSE 0.1%...