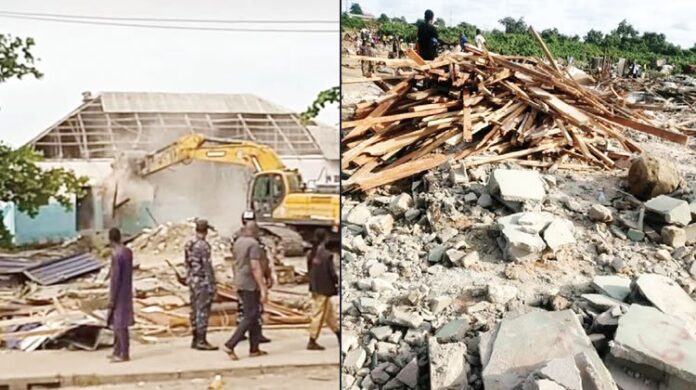 Scene of the demolition

There has been outrage over the demolition of 12 churches and two mosques on 2nd Avenue, FESTAC Town, Lagos State, by officials of the Federal Housing Authority.

Journalist was told that a market and a car mart were also affected in the exercise carried out on Sunday.

Report learnt that the demolition started around 5am and continued till around 3pm.

The leader of the Gate of Righteousness Evangelical International Church, Pastor Joshua Obong, said he started his ministry in the community 18 years ago and wondered why his church was targeted for demolition.

He said, “The officials first came last week and started marking our buildings. After they were done, they left and returned two days later. That was when they gave us a seven-day notice, which expired last Wednesday.

“On Sunday morning, around 5am, we suddenly saw bulldozers at the First Gate, FESTAC Town. They got to my church at exactly 11am; they demolished all the churches along the road, except the Redeemed Christian Church of God, Communion Chapel and CPM, which they spared. All other churches were brought down.”

Obong said there was no other warning prior to the seven-day notice.

He claimed that the government took advantage of the strike action by judicial workers, adding that nobody could approach the court for injunctions to stop the demolition.

“We wrote to them, seeking extension of time, but the letter was not even acknowledged,” he added.

The Overseer of Christ Gospel Church International, Pastor William Ehiorenren, said a senior government official had advised them to send a lawyer to Abuja to sort out the matter.

He stated, “He promised that they would not touch any church till the lawyer returned. Our lawyer was still in Abuja when they came on Sunday, a day of service, and demolished our churches. The lawyer called all their staff members, but they switched off their phones.

“We heard that they want to re-allocate the land and sell to moneybags and make millions. I have not seen where seven days would be given for people to vacate their property.

“We have been in that area for years and we spent millions of naira in building our churches. They could not even give us time to move, because they had mapped out their evil plan to sell the land to people.”

Ehiorenren said his church usually paid tenancy rates to landlords, who he claimed had legal claims to the land.

The cleric accused the government of leaving certain churches, because their leaders had political connections.

He explained that his church was not served any notice of demolition.

He explained that the owners of the churches cleared a swamp and built their structures, adding that the affected worship centres had been in the community for between 13 and 20 years.

According to him, the government accused the pastors of “encroachment and erecting illegal structures.”

Otoibhi, however, queried why the demolition was carried out without adequate notice and while some of the occupants were asleep.

He said, “We are wondering why the government would do this on a Sunday. Are they now working on Sundays? Is it the government that is doing this or somebody that is powerful in government or a politician is behind this?

“The notice they sent to them, they called it final notice, without serving them any previous letter. We asked that they should be given time.

We were discussing this when the bulldozers came in on Sunday morning. The first church was pulled down at exactly 5.45am. Aside from the churches, they also cleared those selling cars in that line. Only a few buildings were spared.”

The cleric said a protest was planned for today (Tuesday) to kick against the “shabby manner” in which the churches were treated.

The Minister of Works and Housing, Babatunde Fashola, did not take his calls or respond to a text message from our correspondent over the matter.

The Managing Director/Chief Executive Officer, FHA, Senator Gbenga Ashafa, did not take his calls, which rang out several times.

However, an official of the agency, who did not identify himself, said the government would address the matter during a press conference on Wednesday.

He explained that the government was in the process of restoring FESTAC Town to its original plan.

“Ask those people for their letters of allocation and approved building plans. They don’t have them.

So, if you have been staying on somebody’s land illegally for over 15 years, how does the person owe you adequate notice? What notice are they talking about?” he queried.