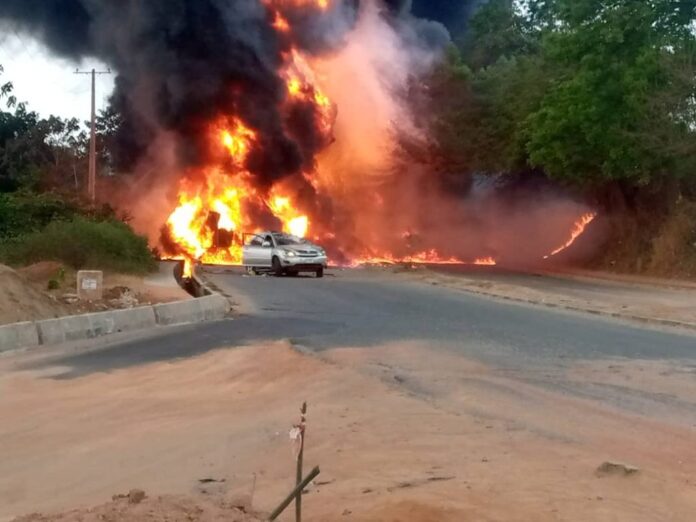 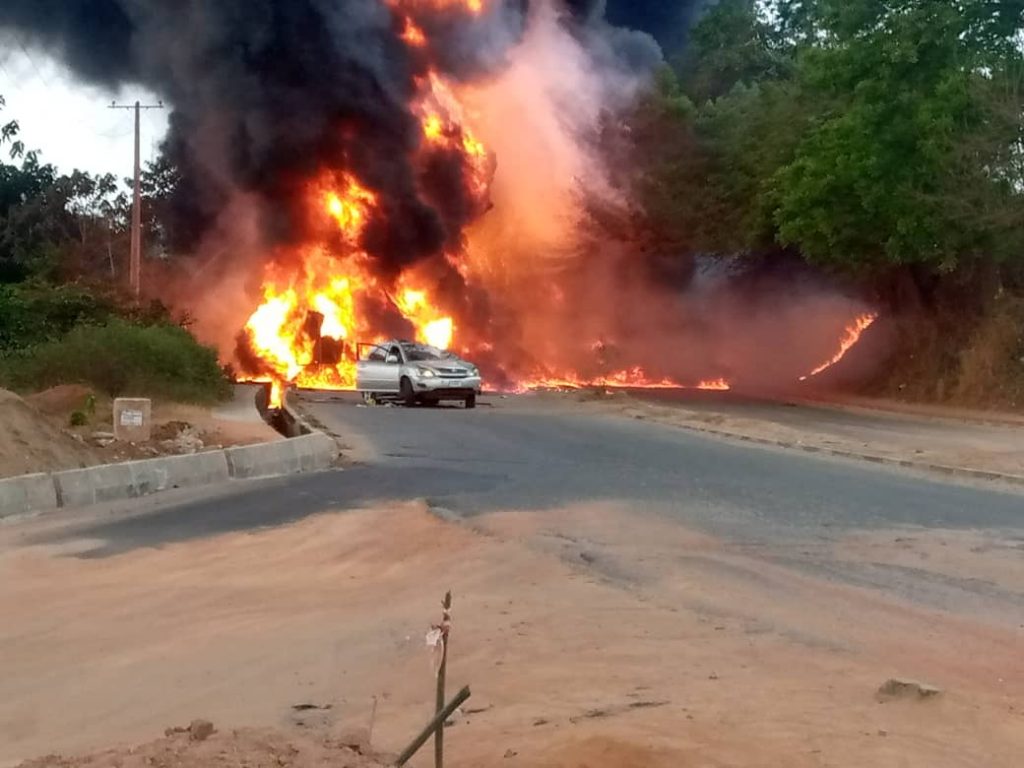 No fewer than three persons were confirmed to have been burnt to death while several others sustained injuries in a tanker explosion in Abeokuta, the Ogun State capital on Tuesday.

Five vehicles and two motorcycles got burnt in the explosion which occurred around the Guarantee Trust Bank, Presidential Boulevard in Abeokuta.

The Director of the Ogun State Emergency Management Agency, Ige Olufolarin, who confirmed the incident said the victims were burnt “beyond recognition” when the fuel-laden tanker exploded.

He said, “About seven vehicles and five motorcycles were also burnt in the explosion.

“It was gathered that the tanker which was coming from Sagamu-Siun-Oke-Mosan Road climbed the overhead bridge lost control of the vehicle while descending from the bridge.”

Eyewitnesses said the tanker hit a motorcycle that was in motion and rammed into some commercial vehicles waiting for passengers at the end of the bridge.

The tanker immediately exploded and the fire soon spread to other vehicles in the vicinity.

The explosion has thrown residents and passers-by into panic as many motorists started making U-turns and headed towards alternative routes within the metropolis.

Journalist who was at the scene of the incident observed that the bodies of three casualties have been evacuated.

Joint rescue operations comprising the Nigeria Security and Civil Defence Corps, the Federal Road Safety Corps, and the Police were at the scene.

He added, “We don’t want conflicting figures. Three persons are now confirmed dead. Their bodies have been evacuated.

According to an eyewitness, the incident occurred a few minutes past 8am and was caused by a brakes’ failure on the part of the tanker.

The Sector Commander, Federal Road Safety Corps, Ahmed Umar also confirmed that three people died in the incident while several others were injured, adding that both the deceased and injured were taken to the Federal Medical Center (FMC), Idi Aba, Abeokuta.

“The cause of the accident is still under investigation, we have to conduct a thorough investigation but it was an accident involving a tanker loaded with Premium Motor Spirit which fell and caught fire which affected other vehicles.

“Our men are still there with the fire service to contain the fire and further spread of the fire,” he said.