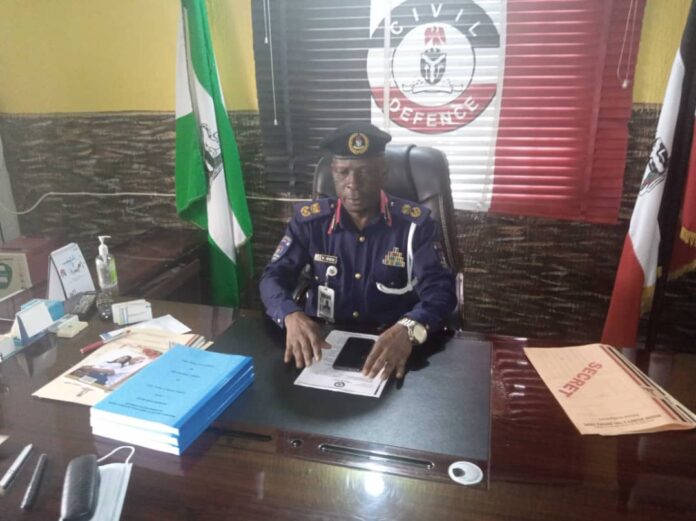 The Nigeria Security and Civil Defence Corps (NSCDC) in Anambra State Command has witnessed a change of Leadership as Commandant Vincent Ogu (JP) officially takesover from Commandant David Bille FCIA, as the New Commandant for the State.

In a press statement e-signed by the Command’s Spokesperson DSC Okadigbo Edwin stated that, “A new State Commandant of Nigeria Security and Civil Defence Corps (NSCDC) Vincent Ogu (JP) an indigene of Imo State, has today Tuesday, 15th of June, 2021, officially assumed duty as the twelveth (12 ) substantive State Commandant of NSCDC Anambra State after taking over from his predecessor Commandant David Bille, FCIA who was recently redeployed.”

In his remarks at the handing over ceremony, the out gone State Commandant, David Bille FCIA, wished the new Commandant good health, God’s guidance and wisdom in the discharge of his duties, while also calling for support from Officers and Men of the Command and members of the public. He appreciated Anambra State Government and other Service Commanders in the state for their support throughout his Stay in the State.

The new State Commandant, Vincent Ogu JP, in his introductory speech, reiterated his readiness to work in accordance with the vision and mission of the Commandant-General of NSCDC, Ahmed Abubakar Audi, PhD. mni and promised to rekindle the people’s confidence in NSCDC to reposition the Command for efficiency and productivity with special attention on human capacity building.

Comdt. Vincent pledged to sustain the improvements and achievements made by his predecessor with his vast exposure and experience which he expects will be brought to bear in running the affairs of the Command.

He therefore seek the cooperation, collaboration and partnership from Ndi Anambra and residents alike by giving useful and timely information to the Command to rid the State of all forms of crimes and criminalities so as to create an enhanced economic environment for the State.

The new State Commandant has an impeccable track records in crime fighting, and has served in different capacities in various state Command amongst which are FCT, Benue, Jigawa, Imo, Rivers, Katstina, Enugu and Bayelsa, in his last posting he served as State Commandant NSCDC Abia State Command.

Highlights of the event was the signing of the hand over and take over notes, and presentation of symbol of authority.