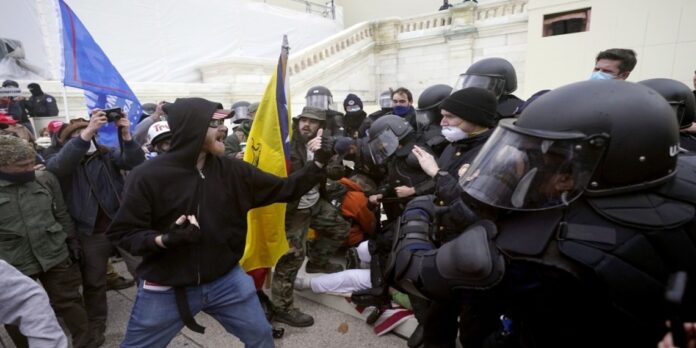 Mr Obama, a strong Biden backer, said Americans would be kidding themselves if they treated the chaos as a total surprise.

Former U.S. President Barack Obama has said history will not be kind to incumbent President Donald Trump over the violence that erupted at the Capitol, Washington D.C, on Wednesday.

The Capitol Building is the seat of the American Congress, equivalent to Nigeria’s national assembly.

This newspaper had earlier reported how pro-Trump protesters had besieged the Capitol in a move to prevent the Congress from certifying the electoral college votes that gave Joe Biden, candidate of the Democratic Party in the November 2020 election, victory.

In the chaos that ensued, a woman, identified as a 35-year-old Ashli Babbitt, former Air Force veteran from San Diego, was shot. She died in the process. Three more persons also reportedly died in ”medical emergencies.”

Several police personnel and protesters were said to have been injured in the ensuing violence leading to a declaration of curfew by the local police chief.

After the Capitol had been secured and some sort of normalcy restored, the Congress and the Senate later reconvened to continue with the congressional certification of Mr Biden’s electoral college victory.

However, condemning the violence mostly perpetrated by Mr Trump’s supporters, Mr Obama said “history will rightly remember today’s violence at the Capitol, incited by a sitting president who has continued to baselessly lie about the outcome of a lawful election, as a moment of great dishonor and shame for our nation.”

Mr Obama, a strong Biden backer, said Americans would be kidding themselves if they treated the chaos as a total surprise.

He blamed the Republican Party and the conservative media for egging on their followers to go violent should Mr Biden’s victory be upheld.

“For two months now, a political party and its accompanying media ecosystem has too often been unwilling to tell their followers the truth — that this was not a particularly close election and that President-Elect Biden will be inaugurated on January 20.

Their fantasy narrative has spiraled further and further from reality, and it builds upon years of sown resentments. Now we’re seeing the consequences, whipped up into a violent crescendo.

He advised the Republican leaders to accept the reality of an impending Biden presidency in order to save America or they can choose to continue stoking the raging fire.

“I’ve been heartened to see many members of the President’s party speak up forcefully today. Their voices add to the examples of Republican state and local election officials in states like Georgia who’ve refused to be intimidated and have discharged their duties honorably.

We need more leaders like these — right now and in the days, weeks, and months ahead as President-Elect Biden works to restore a common purpose to our politics. It’s up to all of us as Americans, regardless of party, to support him in that goal,” Mr Obama said.

Mr Biden, 78, who defeated Mr Trump in both the popular votes and at the Electoral College, will be sworn in, alongside his vice president-elect, Kamala Harris, on January 20.

Mr Trump has, however, continued to vow that he will not concede power to Mr Biden.

For posting unverifiable claims of fraud in the November election and for tweeting in support of the chaos at the Capitol before telling his supporters to be ”peaceful”, Twitter has blocked Mr Trump’s account.