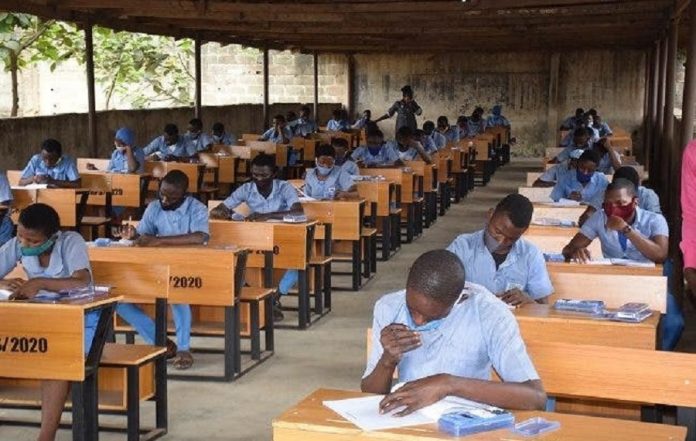 The West African Examination Council (WAEC) has announced the release of the 2021 West African Senior School Certificate Examinations for school candidates with an increase in registration fees from N13,950 to N18,000 with effect from 2022.

This disclosure was made by the Head of Nigeria National Office of WAEC, Mr Patrick Areghan, on Monday, where he said that the examination, which was an international one, took place simultaneously throughout the five member countries of the Council – The Gambia, Ghana, Liberia, Nigeria and Sierra Leone.

The WAEC boss also said that 1,573,849 candidates from 19,425 recognized secondary schools across the country registered for the examination with 1,560,261 candidates actually sitting for the exams.

According to NAN, Areghan said the increment was due to unabating spiral inflation in the country, worsened devastating effects of the Covid-19 pandemic, noting that a part of the new fees would go into remunerations enhancement for the various examination functionaries with effect from 2022 as approved by the council’s Governing Board.

Areghan in his statement said, “As can be seen, in the general cost of doing business and the multiplier effect of insecurity in the country which have consequential effects on the cost of our operations, it is no longer possible to continue to provide services with the current fee of N13,950 per candidate.

“Any amount beyond this ceiling will not be to our consent or knowledge and will definitely not come to the purse of the West African Examinations Council.

Going further he said, “The examination, which was an international one, took place simultaneously throughout the five-member countries of the Council – The Gambia, Ghana, Liberia, Nigeria and Sierra Leone, using the same International Timetable.

“The examination spanned seven weeks, between August 16 and October 8, 2021.  Throughout the period, we were faced with serious security challenges in the South East (IPOB and ESN sit-at-home order) and banditry, kidnapping, insurgency, etc, in the north and other parts of the country.

All these, coupled with the continuous effect of the COVID-19 Pandemic, made the whole exercise a Herculean one.

“In conducting the examination, we were guided by the various measures/protocols rolled out by the Federal and various State governments, aimed at checking the spread of the Corona Virus Disease.

The Coordination of Examiners and Marking of Candidates’ Scripts took place at Eighty-Five (85) traditional and three (3) e-Marking Venues throughout the country.  A total of Seventy Seven Thousand, Three Hundred and Sixty-Eight (77,368) Examiners participated in the coordination and marking exercise.

“The examination ended on October 8, 2021, and today, Monday, November 22, 2021 – 45 days after the conduct of the last paper, we are releasing the result! This is a record time, taking into consideration the fact that we lost a week to insecurity, during the marking exercise in the South East, occasioned by the heightened tension before and during the Anambra Gubernatorial election.

“It is, therefore, not true, as you can see, that WAEC delayed the release of the results of the WASSCE (SC) 2021 as is being speculated in some quarters. We have kept to our promise, in spite of all odds.  We should be praised rather than being vilified.

Nothing can be faster or earlier than what we have done.  We do not release results without marking the scripts and processing the scores.  We are grateful to the examiners for doing a good job within the stipulated period.

“A total of One Million, Five Hundred and Seventy-Three Thousand, Eight Hundred and Forty-Nine (1,573,849) candidates registered for the examination from Nineteen Thousand, Four Hundred and Twenty Five (19,425) recognised secondary schools in the country.

“The examination was also administered to candidates from some schools in the Benin Republic and Cote d’Ivoire, where the Nigeria curriculum for Senior Secondary School is being used.

Schools in Equatorial Guinea could not present candidates for the examination due to logistic challenges posed by COVID-19. ”

While answering questions on the performance of the candidates at the 2021 WASSCE, Areghan said that 1,398,370 candidates obtained credit and above in a minimum of 5 subjects (with or without English Language and Mathematics), representing 89.62%.

He also said that 1,274,784 candidates, which represents 81.7% of those who sat for the examinations, obtained credits and above in a minimum of five (5) subjects, including English Language and Mathematics.

Recall that WAEC successfully organized the 2021 WASSCE between August 16 and October 8, 2021 across the country despite the effects of Covid-19 and insecurity in the South East due to activities of IPOB, and banditry and kidnapping in the Northern part of the country.