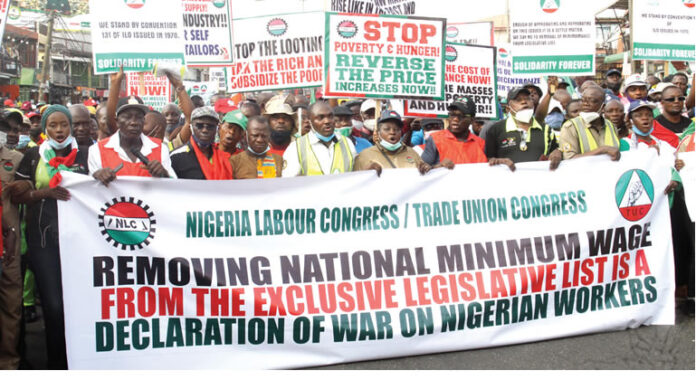 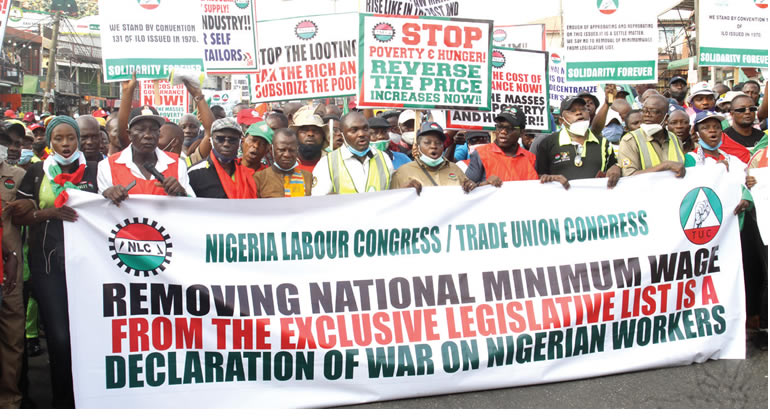 Workers and labour leaders during a protest against a bill on the minimum wage in Ikeja, Lagos…on Wednesday.

• Workers have mandated us to declare nationwide strike – Wabba

The leadership of the National Assembly will, on Tuesday next week, meet labour leaders over a  bill which seeks to remove the minimum wage negotiations from the exclusive legislative list.

The Majority Leader of the House of Representatives, Alhassan Ado-Doguwa, disclosed this on Wednesday while addressing workers who marched to the National Assembly Complex in Abuja to protest the bill.

But the sponsor of the bill, Mr.  Datti Muhammad, in an interview with journalist took a swipe at the Nigeria Labour Congress and the Trade Union Congress, saying they should be civil in their opposition to the bill and stop attacking him.

Recall that the bill seeking to remove negotiations on the minimum wage from the exclusive list to the concurrent list passed the second reading in the House on February 23.

At plenary, Mohammed, while defending the bill, stated that it would allow both the federal and state governments to freely negotiate minimum wage “with their workers in line with our federalism.”

But on Wednesday, workers across 36 states of the federation and the Federal Capital Territory staged protests to register their opposition to the bill.

Addressing the workers, Ado-Doguwa announced that the Speaker, Femi Gbajabiamila, whom he said was in Lagos, had fixed a meeting between the lawmakers and the unions for Tuesday.

As early as 9am on Wednesday,  about 2,000 protesters had besieged the main entrance of the National Assembly.

Although security agents shut the gate and prevented them from entering, at 11am they overwhelmed the operatives and forced their way in.

After their members had entered through the main gate, the National President of the NLC, Ayuba Wabba, and his TUC counterpart, Quadri Olaleye, led other labour leaders to the National Assembly complex through the second gate.

The labour leaders thereafter presented their petition to the House and the Senate.

Copies of the petition were received by Ado-Doguwa, on behalf of the Speaker; and the Deputy Chief Whip of the Senate, Aliyu Sabi Abdullahi, who represented President of the Senate, Dr. Ahmad Lawan.

Addressing the workers, Wabba noted, “You  have given us the mandate that if the right thing is not done, that the leadership has the right to declare a national strike.” The crowd screamed, “Yes!”

Workers have mandated us to declare nationwide strike –Wabba

“We are here today on behalf of the Nigerian workers, pensioners, the downtrodden, to make it clear and unambiguous that the bill that seeks to remove the minimum wage from the exclusive list to the concurrent list is not accepted.”

According to Wabba, the issue with Nigeria is bad governance. He said the workers had suggested how the cost of governance could be cut and resources better managed to leave more funds to pay salaries.

The NLC President also noted that while the local government system had been made to collapse, the huge security votes maintained by governors had not been used to address insecurity in the country.

Addressing the workers on behalf of the Speaker, Ado-Doguwa stated, “He (Gbajabiamila) has also told me to tell you, through the presidents of the organised labour, that he will organise a joint meeting of the National Assembly leadership with the leadership of the organised labour on Tuesday next week, so that this matter can be treated in a manner that Nigerians want.”

The Majority Leader confirmed receipt of the petition and assured  the workers that it would be given  “the right treatment.”

Ado-Dogunwa stated,  “I want to assure you that the House of Representatives will give you a listening ear and fair hearing. We will listen to your grievances. We will still invite you to come and engage with the relevant committee, of which I am a member; the constitution review committee.

“You will come and make your positions known formally; your positions will be heard at the committee level. And when we come to plenary, if we consider the bill, the members that are representing your constituencies will be on the ground that day to do justice to the bill.

“And I can understand:  the only justice to that bill is to kill it. (workers chorused ‘yes’). Is that your position? Is that what you want? Then, I will like to advise you: go ahead and lobby members that you elected. Tell them that you don’t want that bill, and the members will stand for you and make sure that the bill is killed.”

But the sponsor of the bill,  Muhammad, berated the unions, saying they should wait for the public hearing on it, rather than resorting to smear campaigns against him.

Muhammad, who represents Sabon Gari Federal Constituency in Kaduna State, lamented that he had been under attack since the bill became public.

The lawmaker said, “They are to come to the public hearing, not to resort to smear campaigns as they are doing. On the (social media) platform of labour, I have seen a lot of smear campaigns going on against me.

On his part, Sabi-Abdullahi said the lawmakers would not do anything that would jeopardise interests of the workers.

He stated, “I am a member of the constitution review committee in the Senate and I want to guarantee that our process will include the leadership of the labour. They are going to be part of our deliberations. I believe that you have confidence in your leadership.

“Therefore, we are together and I want to guarantee that on behalf of  Senator  Ahmed Lawan, who is also a very progressive lawmaker, do not go home having any fear.”

In Kogi State, besides protesting the bill, workers also demonstrated against non-implementation of the N30,000 minimum wage.

The NLC and the TUC during a protest at the state House of Assembly gave the state government a March 22 deadline to fully implement the minimum wage.

The state NLC  Chairman,  Onuh Edoka, said since the state government set up a 17-man committee in 2019, nothing had been done.

He stated, “Life indeed has become unbearable for an average Kogi worker because of the quantum of the current N18,000 national minimum wage being paid in the state vis-à-vis its usefulness in the market environment.”

Opposing the differential wage bill, he stated. “We disagree in totality with the move by the House of Representatives to transfer  the national minimum wage from the exclusive legislative list to the concurrent legislative list.”

In Ogun State, during a protest at the state House of Assembly, the state NLC Chairman, Emmanuel Bankole, urged the lawmakers to reject the bill.

In his response, the Speaker, Kunle Oluomo,  assured the workers that their request would be granted.

Workers in  Katsina State also protested at the state House of Assembly, Katsina, where the NLC Chairman, Hussaini Hamisu, faulted the bill and described it as barbaric.

At the Edo State House of Assembly, the state NLC Chairman, Sunny Osayande, stated that the bill would give governors the licence to drag the country back to the era of ridiculous slave wages.

He said: “The bill will create an expansion of a community of the working poor with all the attendant consequences for socioeconomic cohesion, stability and progress.

It could lead to the exclusion of the private sector (both organised and unorganised) from the concept, rationale and logic of a national minimum wage.”

In Sokoto, the Sokoto State capital, the state NLC Chairman,  Aminu Umar, stated, “The labour movement in Sokoto will resist any attempt by anybody or group of persons working against the interest of labour in Nigeria.”

The Kano State chapter of the NLC also protested at the state House of Assembly, where the Chairman, Mr Ado Minjibir, said workers would not accept moves that were against their interests.

Members of the NLC and the TUC  protested at the  Lagos State House of Assembly.

The unionists, who were stopped at the entrance to the House of Assembly by security men,  later gained access to the premises.

The state Chairman of the TUC, Gbenga Ekundayo, urged the Assembly to reject the bill.

He said, “This minimum wage is not only about the government, it covers every working-class Nigerian and to remove the wage from the exclusive list to concurrent is an increase in challenges that we do not need.

“Any attempt to do otherwise will be violently restricted as the sweat of labourers must not dry up before their salaries are paid. Leave our minimum wage alone.”

Also, the state chairman of NLC, Dr Funmi Sessi, said Nigerians were not happy with government policies as they always hurt the people.

The protest took a different turn in Ekiti State, where the organised labour accused some state governors of being behind the controversial bill.

The state TUC  Chairman, Sola Adigun, during a protest in Ado Ekiti, stated, “The infamous bill, which was part of the plots to exterminate Nigerian workers by the APC (All Progress Congress) governors was not only antithetical to the international minimum wage, but also alien to the global practice.”

On his part, NLC state Chairman, Kolapo Olatunde, said workers would embark on a national strike, if the National Assembly should go ahead with the plan to pass the bill.

Workers in Anambra State marched round major streets in Awka, the state capital to protest the bill.

He said by November if the wage was not fully paid in the state, the labour force would embark on a strike to disrupt the governorship election in the state.

Workers in Bayelsa State marched to the state  House of Assembly, where they presented a petition to the lawmakers.

The Ondo State House of Assembly threw its weight behind agitation of the civil servants rejecting the bill.

The workers staged a peaceful protest on the streets of Akure,  the state capital,  and marched to the Assembly complex,  in line with the directive from the national leadership of the NLC.

The Delta State chapter of the NLC during its protest in Asaba,  urged lawmakers to focus on insecurity and abandon the bill.

During a protest in Calabar,  the Cross River State Chairman of the NLC, Ben Ukpepi, described the bill as  retrogressive.

The Imo State NLC Chairman, Austin Chilapku presented a petition to the state House of Assembly in Owerri.

Besides protesting,   the Akwa Ibom State chapter of the NLC threatened to recall any National Assembly member from the state who supported the bill.

Addressing workers in Uyo,  the state  Chairman, Sunny James, said the minimum wage must not be taken away from the exclusive list to concurrent list.

He stated, “We are happy because we didn’t see any of our legislators supporting the bill. If we see any, such a person will be recalled from the National Assembly.”

The Speaker of Osun State House of Assembly, Timothy Owoeye,  declared that workers’ wage would remain on the exclusive list.

Owoeye spoke while addressing the protesting  NLC members in Osogbo. 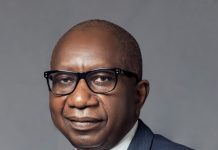 HOW SYLVESTER AGREED TO JOIN THE CULT AND DRANK ENGINE OIL...