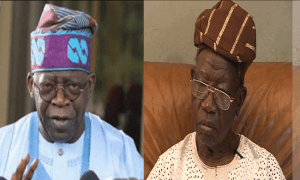 Why Jakande and Tinubu didn’t get along

At the time he died last Thursday, Alhaji Lateef Kayode Jakande, LKJ was undoubtedly the role model for good governance with legacies spread around Lagos.

So impactful was his touch on society that ahead of the 1983 election that those plotting to rig the election in some Unity Party of Nigeria, UPN controlled states knew better not to touch Lagos.

That was essentially given the phenomenal imprints he had put on the ground in his first term.

The memory of LKJ and some of his colleagues in the Second Republic refreshes the ideological orientation of the political class of that era.

Jakande’s UPN had its four cardinal programmes of rural integrated development, free compulsory education at all levels, full employment and free health for all.

Jakande by and large pursued these programmes and even more. It is remarkable that one of the legacies he is best remembered for is housing which significantly was not among the UPN’s cardinal programmes.

But through the Jakande Estates dotted around the then rural areas of Lekki, Ajah, Mile Two and so, the programme of rural-urban integration was driven.

While the UPN governors pursued their platforms with gusto, the National Party of Nigeria, NPN, was also known to have pursued its programme of housing for all with similar gusto.

The federal administration built and commissioned housing estates around the country known as Shagari houses.

The competition by the UPN and the NPN to deliver on their platforms was a healthy competition that helped to further development.

None of the five civilian governors who followed matched him in the delivery of democracy dividends to the electorate.

But for a man with such veritable legacies on ground, it is remarkable that he died a diminished political entity. It is doubtful if he could have weighed influence in the election of his councilor in Ilupeju after 1999.

Though he was a member of the All Progressives Congress, APC, the party apparently did not bother to associate with him.

Jakande did not come into the political terrain as many others. He came well prepared after a successful stint as a journalist and newspaper manager.

Having associated with Chief Obafemi Awolowo from the fifties, he was part of the inner caucus who prepared the policy framework for the UPN during the pre-registration meetings that regularly took place at Awolowo’s residence at Apapa.

By the time the party was registered and he was eventually elected as governor, Jakande went on to enunciate programmes and projects that defined his legacy.

Perhaps one project which will continue to haunt many in the APC is the abandonment of the metro line.

At the flag-off of the project in July 1983, Jakande who was not given to self-adulation was reported to have said that the metro line project was one that generations in 100 years’ time would thank his administration for.

However, six months later, he was out of office after the Muhammadu Buhari coup and the project was scuttled albeit with great financial cost on Lagos State. The military government ‘diagnosed’ it as a white elephant project.

Had that metro line project been allowed to proceed, not only would it have addressed today’s transportation chaos in Lagos, it would also have shone as an example worthy of emulation by other parts of the country.

Indeed, given his success as governor even while still in office, the idea of Jakande succeeding Awolowo began to crystalise and he began to be called Baba Kekere.

After Awolowo’s death in 1987, and as the country edged towards the Third Republic, Jakande had become about the most prominent political personality in Lagos State.

His choice of his faithful adherent, Femi Agbalajobi over Dapo Sarunmi to be candidate of the Social Democratic Party, SDP for the Lagos State Governorship Election of 1990 tore the progressive camp asunder.

Sarumi with the heavy money and backed by the Gen. Musa Shehu Yar‘Adua tendency fought Jakande/Agbalajobi to standstill within the SDP. It was a battle of wits that ended in a war of mutual destruction.

One of the operatives of the Sarumi camp was one Mr Bola Ahmed Tinubu who at that time in the late eighties had not too long ago just retired as an executive with Mobil Oil.

In the end, the military regime intervened and both Agbalajobi and Sarumi were removed from the contest. In the repeat primary, Yomi Edu who was regarded as a product of the Sarumi tendency emerged as a candidate.

His choice of Awolowo’s daughter, Mrs Tokunbo Awolowo-Dosunmu was seen as a sop to Jakande and the Agbalajobi tendency. However, it was flatly rejected.

Jakande then decided to show his control of the Lagos political field in the main election between the SDP’s Edu and the National Republican Convention’s candidate of Otunba Michael Otedola.

Despite having complete control of the State House of Assembly, the SDP in the main election massively lost the governorship office to the NRC’s candidate.

That was because on election eve, the Jakande tendency spread out the word to vote Otedola instead of Edu.

By showing his political strength and savvy he showed that he was the supremo in the progressives’ camp.

Later as governor, Tinubu kept his distance from Jakande despite the phenomenal programmes and projects of the LKJ years.

Another spot on Jakande’s glorious political sojourn was his adventure into the Sani Abacha government.

Though he entered the government as was agreed by Yoruba elders and performed creditably as secretary of housing development, he along other Yoruba elders when asked to leave rejected the call.

That was what drew the curtain to an eventful political swagger across Lagos. He lived on, however, till last Thursday.

But his legacies dotted around Lagos and the men and women he raised through institutions he created will even endure more.