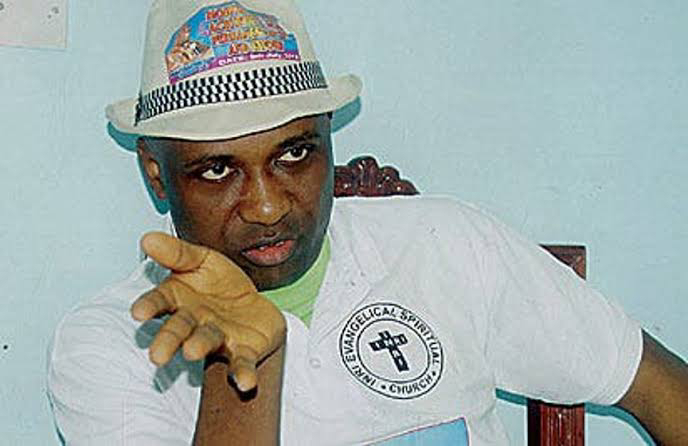 A true prophet is rare in this dispensation, what we have most of the times are prophets who give ‘prophecies’ when there is a situation on ground that already looks like what they are prophesying about.

Biblically, it doesn’t look like prophecy but an opinion or guesswork after studying the underlying situation.
I would love to borrow the word of a popular man of God that says a true prophet is one prophesies when there is no situation on ground. A true prophet is one who speaks into the future, he talks on issues people never believe but eventually comes to pass.

We have several prophets in Nigeria and the Anambra gubernatorial election which will be happening in seven-day time seem to have separated the shaft from the wheat. As we speak, we have about three prominent prophets that have spoken about the coming election at different times.

Amongst these prophets, Primate Elijah Ayodele who is the leader of INRI Evangelical Spiritual church is different and distinct in his prophecies on the election. As a matter of fact, there is no election in Nigeria and the world at large that he doesn’t prophecy what the outcome would be and one interesting part about him is the uniqueness.

He follows that consistent pattern to give these prophecies and it is one of the reasons his prophecies are always referenced in any election in Nigeria and the world.

Infact, many politicians end up misrepresenting his prophecies and use it for their campaigns, which shows how powerful and distinct his prophecies have become over the years.
We earlier mentioned three prophets who have given prophecies on the November 6 election. It is important to state in clear terms what they said exactly about the election.

Prophet Odumeje revealed that he doesn’t see an election holding, he said it will be an election of guns and violence.
‘“The future I am looking at, everybody will be shocked because there will massive death. I am seeing a massive death. And it shall be gun to gun.”

He added: “I am looking at an election that will come in Anambra State. Be praying. I don’t see elections, I see deaths. I see deaths of guns[sic].”
“I don’t see the election holding. I have been praying and telling God. Because I am seeing where people kill people. Don’t say I did not said [sic] it.”

Rev Fr Mbaka didn’t come out straight but he stylishly endorsed the candidate of Accord party, Godwin Maduka and revealed that he is the best candidate Anambra can have as a governor during his visit to Mbaka’s church. These were said earlier this week, few days to the election.

The prophecies of Primate Ayodele on Anambra election dates back to December 2019. He had clearly stated that APC will not win the governorship election in the state 11 months before the election. In March again, Primate Ayodele released another prophecy where he talked about candidates that won’t win election even if they get chosen by their party.

‘’  “On Anambra 2021, I want to advice Paul Orajiaka, Andy Uba from APC, Uche Ekwunife, Godwin Ezeemo from APGA not to bother about governing the state.
“They don’t have God’s backing.
“Instead of wasting money to campaign, they should channel their money into humanitarian activities like giving the less privileged and widows in the society.”

(https://theeagleonline.com.ng/those-who-wont-be-governor-in-anambra-ekiti-primate-ayodele/)’’. This particular prophesy caused tension as some who were aspirants then tackled the prophet for giving such a prophesy against their ambition.

In May, Primate Ayodele gave prophetic advise to political parties on candidates they should choose if at all they want to have a chance in the election.

For APGA, he mentioned three names that include Charles Soludo and Chukwma Umeoji. He further went to say the party will kick against Soludo and his emergence will cause crisis within the party, we all can see what is happening in APGA now. Soludo’s candidacy brought faction and till now, they are yet to settled.

For PDP, Primate Ayodele said the candidacy is between Valentine Ozigbo, Godwin Maduka, Tony Nwoye. He advised the party to be free and fair in the primary election because of emergence of the candidates. We all saw how PDP almost killed their chances in the election, INEC didn’t recognize any candidate until recently due to the fact that they were not free and fair enough.

‘’ ‘’In PDP, it is between, Godwin Maduka, Tony Nwoye, and Mr Valentine Ozigbo but the interest of the party is on Godwin Maduka, he must not also underestimate any of these aspirants, if he plays his way well, He can emerge as the candidate of the party. PDP must play a free and fair primary as some factors will influence Godwin Maduka against others’’

In YPP, He mentioned Ifeanyi Uba and in APC, he mentioned about four people who can help APC have a chance in the election but warned that they should work on aggrieved parties as it may cause mass exodus in the party.

Though Andy Uba emerged in the APC but one of the aspirants, George Moghalu is currently in court to claim candidacy. He has a very good case and may eventually be declared as the right candidate of the party.

‘’In YPP, Ifeanyi Uba will scale through as the candidate of the party. His challenger, Chief Emma Nkwocha should collapse his structure for Ifeanyi Uba because he won’t be able to make bold statements for the party.

‘’In APC, it is between George Moghalu, Ben Atiaba, Andy Uba. APC must play it cleverly so that it will not cause mass exodus on the party, they should also settle aggrieved party members.’’

After releasing these prophecies to parties, Primate Ayodele then revealed that he sees violence, killings before the main election and during the main election. This was when no situation was on ground in Anambra but as prophet that he is, he foresaw it and the result is very visible as we speak.

‘‘I want to urge every politician in Anambra to desist from violence, shun thuggery and destruction of properties, rather embrace peace and the spirit of sportsmanship. I see violence and killings during the primaries and the main election,’’ (https://dailypost.ng/2021/05/10/anambra-2021-primate-ayodele-releases-fresh-prophecies/)

Subsequently in October, Primate Ayodele spoke about the main election and how the outcome will look like. In his prophecy, He mentioned that the APC and APGA are bent on taking power by force through rigging in the state but YPP and PDP have a better chance in the election. He then advised them on how to win the election.

‘’PDP has what it takes, they have the resources but except their candidate, Valentine Ozigbo does the necessary things, he won’t win. A coalition will help PDP more to get their chances. If they do what is right, they will get it. Unless PDP wakes up, gets a coalition, and puts their house in proper order, they will not be victorious, they should manage things properly.

Three days to the election, things will start changing, PDP should prepare well’’
‘’YPP candidate, Ifeanyi Ubah is not ready to take victory, victory is surrounding him but he isn’t ready for it. They will ease him out technically, he is getting some things wrong except he does the needful.

He has what it takes but he isn’t managing it, he is playing around the victory and people are not seeing him as well prepared for the election victory. The victory is close to him but he doesn’t know how to claim it.’’

Going through these prophecies, one can be left with no doubt that the sequence shows the truly, Primate Ayodele didn’t talk based on opinion or what he has heard before, It was a result of divine encounter with God on the election. He didn’t just speak without explaining in details what his prophecies meant.

Our concern is for Rufus Giwa Polytechnic to remain alive –...