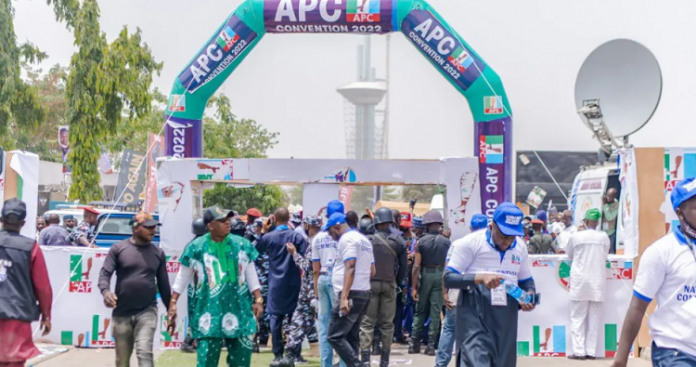 Statutory delegates will not be allowed to vote at the ongoing convention of the All Progressives Congress (APC) following an order of the Court of Appeal.

On Monday, the Court of Appeal in Abuja restrained the National Assembly, INEC and others from imposing statutory delegates at the ongoing APC convention.

Abdullahi Adamu, the Chairman of the All Progressive Congress (APC) had approached the appellate court in an ex-parte application seeking to stay the execution of the judgment of the High Court in Kano which approved for statutory delegates to vote.

In his ruling, Justice A.M. Liman of the Kano division of the federal high court held that “Section 84(8) cannot be interpreted to have excluded statutory delegates from voting at the convention, congress, or meeting by virtue of Section 223 of the 1999 constitution (as amended) and Article 20(iv)(c) of the All Progressives Congress (APC) constitution, which allow statutory delegation to vote at the convention, congress or meeting”.

Appealing the decision of the lower court, the APC chairman approached the appellate court to restrain the enforcement of the aforementioned judgment which allows statutory delegates to vote at the convention.

He argued that the applicant will suffer irreparable damage if the respondent is not restrained from enforcing the judgment.

He also argued that Section 84(8) of the Electoral Act on statutory delegates’ participation in primary elections, which amendment was still awaiting the assent of the president, was not in conflict with section 223 of the Nigerian constitution of 1999 and Article 20(iv) of the APC constitution.

A three-member panel of justices led by justice Haruna Tsammani granted Mr Adamu’s prayer and restrained the enforcement of the June 3 order by the Kano court.

The APC chairman filed for an interim order of the Appeal Court for the suspension and/or stay of execution of the judgement/order of the Federal High Court, Kano Division delivered by Hon. Justice A.M. Liman in suit No: FHK/KN/CS/137/2022, pending the determination of the Motion on Notice filed on the 6th day of June 2022 for the Stay of Execution of the said judgment.

The Appeal Court however granted the order stating, “An order of interim injunction is granted restraining the respondents and in particular, 1st to 3rd respondents, whether by themselves, their agents, servants, privies or howsoever called or anybody howsoever, from executing or further executing enforcing or further enforcing or in any manner from giving effect to or relying on the judgemnt of the federal high court in Kano division delivered by Justice A.M Liman.”

The court ordered that parties in the suit be served the court processes by substituted means.

The matter was adjourned to June 9 to hear the appellant’s motion on notice.

Statutory delegates are party members who have held public office before. They include: Governors and their Deputies, President and Vice President, political parties’ National Working Committee members, state party chairmen and secretary

Others are; councillors, local government chairmen and their vices, political party chairmen in all the 774 LGAs, state and federal lawmakers.

While the APC National Chairman is the appellant, the respondents include; Senator Mas’ud El-Jibrin Doguwa, Hon. Habibu Sani, Hon.Bilyaminu Yusuf Shin’Kafi., the senate President, the speaker of the House of Representatives and the Independent National Electoral Commision.