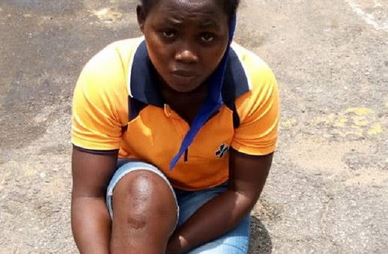 The suspect while confessing to the crime admitted that she did it out of self-defence.

A 28-year-old mother of three, Justina Eje has been arrested by operatives of the Lagos state police command for allegedly stabbing her husband to death with a knife in the Ikorodu area of the state.

Eje, while speaking with journalists, during the parade admitted to have killed her husband but she insisted that it was self-defence.

The woman, who claimed to have been separated from the father of her three children also claimed that the husband came to where she had relocated to when the incident happened.

The woman narrated that “On that fateful day, my late husband, Edwin Anduaka came to my house in Ikorodu and said he wanted to collect a jewellery and a cloth from me after I had packed out of his house.”

She added that “after I had given him those things he requested for, he insisted that there was still a problem but I was not prepared for the problem and managed to calm him down.”

The suspect also continued that “He left and later returned to my kiosk, where I was selling boiled noodles and fried egg and asked for our children clothes. I pleaded with him that the children had gone to school ”

“I was preparing food for one of my customers and I was holding a knife because I told him to wait till when the children would come back from school, he started beating me.”

She claimed that “We started fighting and the knife pierced him in the stomach. He fell to the ground and was rushed to the hospital, where he died.

DOWEN COLLEGE: INVESTIGATION INTO THE DEATH OF SYLVESTER OROMONI ONGOING...

78 ARRESTED FOR RAPE OF MINORS IN JIGAWA