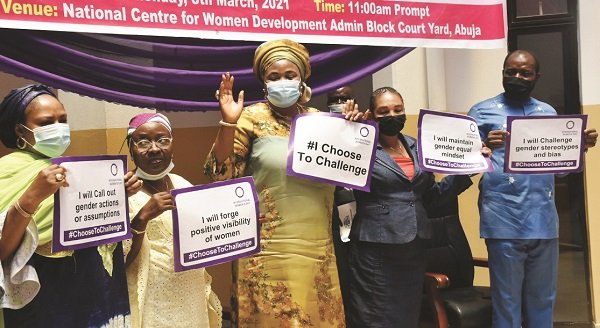 So, women from all works of life in their homes, offices and events struck the ‘choose to challenge’ pose – one hand held high – and pledged to challenge issues preventing woman from fulfilling their potentials.

In his speech to commemorate the IWD, the United Nations Secretary-General, António Guterres, said there were still a lot of challenges before women that need to be addressed.

He said: “Too often, services are delivered by women, but decisions are made by men. Just 22 countries have a woman as Head of State or Government; just 21 per cent of ministers are women, and women parliamentarians make up less than 25 per cent of national legislators,” he said calling on women to challenge issues that affect their lives.

Some women educators shared their experiences with gender inequality in the workplace with journalist.  While some said they faced problems with inequality, others said they were able to excel as long as they worked hard.

A  Lecturer II in the Department of Geology, Afe Babalola University, Ado-Ekiti, Mrs Rita Adeleye, lamented that the male students do not take female lecturers serious in school, compared to their male counterparts.

As a result, she said their decisions were not respected like the male lecturers.

“The students do not take us seriously and respect our decisions on many occasions.

The students see us as mothers and to some extent; it affects the seriousness of the students to class activities and imparting knowledge on them.

“Some of those students even bully us (female lecturers) because they see us as being weaker gender.

When we create rules for the students, they violate them without considering the consequences. It is difficult for us to enforce rules on those students.

We are a bit lenient on them when they start to appease to the motherly disposition in us,” she said, adding that some of her friends in other institutions also lamented that the male lecturers want them to work equally since they earn the same salary.

A teacher at Daniel International School, Agunbelewo, Osun State, Mrs. Adejumonke Taiwo, said parents had less regard for female teachers in school but looked to the men to solve their problems.

“When they sight male teachers, they calm down to explain their grievances to them,” she said.

A Lecturer in the Department of  English, Federal College of Education,(FCE), Pankshin, Plateau State, Dr. Peace Sorochi Longdet, said the gender  inequalities are multidimensional in a working environment.

Longdet said a woman might find it difficult to excel in the work place if she is unable to balance society-imposed responsibilities on women with the requirements of her job.

While she said the challenges in her work place were not really enormous, she has had to find that balance to excel.

She said: “Sometimes the challenge could not really be from the work environment, but a personal thing.

“So, as a woman, if you are not able to find that balance, you find out that, it will affect you in your work place.

You will find out that you will be stagnated.  While others are making progress academically to improve on their qualification, you are just there.

‘’So, I will not say it is a challenge imposed by the work environment, but, because of the demand of the environment.  But the inability of the woman to find her balance poses as problem.”

Nevertheless, Longdet said had faced discrimination in getting into a position because she was a woman.

“There are sometimes there is a little bit of leadership tussle where a space is created.  A man may be contesting to become the head of the institution and she is also contesting and applying.

“Then you find out that you don’t really matter as a woman.  Her performance doesn’t matter, whether she merits it, she will be judged on the basis of being a woman.

“We had had such challenges of gender inequality…in the work place where a woman applies for a position, as I am sharing from my own experience, where you apply to do a particular job and then the head tells you out rightly that ‘we are not going to give you this post because you are a woman.

“You can see that it is not because you cannot do it but because you are a woman. So the women have such challenges,” she stated.

The English teacher also complained of sexual harassment as one of the challenges women face.

“We also have a problem where some offices being manned or headed by men are characterised by sexual exploitation, sexual abuse or harassment,” she said.

She said: “In the history of tertiary institutions in Nigeria, only 16 female Vice-Chancellors have been produced.

I, thereby choose to challenge that female academia should be given equal and level playground to seek for the position of the Vice Chancellor in tertiary institutions.

Women should be motivated and encouraged by all to dare that which is assumed to be the seat of the male folks.

The likes of Professor Grace Alele Williams of the University of Benin (UNIBEN) and Professor Grace  Ekpo of Uyo did well as VCs in their institutions. Therefore, we can do immensely great if given the opportunity.”

However, some educators say they have not experienced any discrimination in their work places.

Mrs. Oluwasola Omolola, a lecturer at the Federal University Oye Ekiti (FUOYE), said her career in the private sector and as a lecturer had been devoid of gender-based discrimination.

“I have worked in the private sector before moving to public school and in all honesty, there has not been any noticeable discrimination like that.  While in the media, I worked with female bosses and I do not have any terrible tale to tell.

“Since I joined the academia, women have served in various capacities ranging from Head of department, to Dean of faculties and postgraduate school,” she said.

“However, I am looking forward to a time when we will celebrate more women as chief executive officers in government owned tertiary institutions.

“Though, we are not doing badly, female even get grant opportunities in a bid to promote gender equality. I look forward to quality representation and more female friendly environment,” she said.

Another lecturer in the Business Administration Department of the University of Lagos (UNILAG), Dr. Bola Dixon-Ogbechie, said as far as she knew, women were fairly treated in her institution.

“Actually, in the academic sector, particularly in my faculty, we do not have gender inequality issues. We are all equal and judged based on academic competence.

In my own environment, I never allowed people to run me down because I am a woman.  Any responsibilities given, I complete them,” she said.

As an active member of the Academic Staff Union of Universities (ASUU), Dr. Dixon-Ogbechie said she has competed for positions in the union against men and won.

“In our union’s last election, I competed against seven men and they did not say because I was a woman I should be given a slot. We had to vote for our national delegates’ conference.

Out of all the people that contested I was the only female. I competed on equal footing and I won.

“The men have value for women.  They do not discriminate at all. We are all on equal footing. Once you can do it, you get the chance.

If you are lazy, you also get your reward.  Here if there is a problem, the problem will be from the woman herself.  The system is very open and liberal,” she said.

An engineer at the Federal Polytechnic Bauchi, Jemilat Adamu, also said she does not experience gender inequality at work.

“Gender inequality is a global challenge.  It is seen even in countries that have a solid gender equality culture.

But honestly in my work environment, I have never heard or seen any case of gender segregation.

Campaign and awareness have systematically improved the perception of this kind of inequality.

I believe with time, there would be equal opportunities for both gender,” she said.