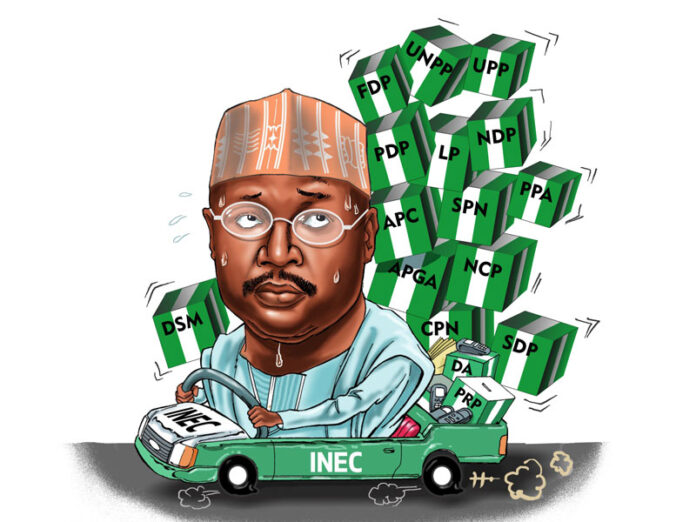 Chairman of the Independent National Electoral Commission (INEC) Professor Mahmood Yakubu was last week sworn in for a second term by President Muhammadu Buhari, following his clearance by the Senate. This is a remarkable feat. Yakubu is the first chairman to be returned to the post of the electoral umpire since inception.

That he is distrusted by the leadership of both the ruling All Progressives Congress (who accuse him of orchestrating their loss of Zamfara and Rivers States) and the opposition Peoples Democratic Party (who accuse him of using ‘inclusive polls’ to deny them of Kano and Osun States) means Yakubu must be doing something right.

WWhile we congratulate Yakubu on his renewed mandate, the challenges ahead are familiar, but are by no means easy. Like all his predecessors, Yakubu has thrown up some immediate priorities that the commission should tackle head on. The first is in ensuring the speedy passage of a new electoral law for the country.

The Electoral Act No. 6 2010 (as amended) is dated and its amendment is vitally important to conducting free and credible elections. Fortunately, the National Assembly has now pledged to look at the issue with some dispatch. No less important is the need to clean up the voter register ahead of 2023 general elections.

It is clear to all that the present voter register is bloated, made up with many fictitious and dead names. This has been obviously made poignant over the years with “poor” turnout in every election. The continuous voter registration is another opportunity for citizens to participate in the process by registering as voters ahead of the general elections in 2023.

However, perhaps even more heart-warming is INEC resolve to deploy electronic voting in future elections, starting with the Anambra governorship poll coming up in the first quarter of next year.

There is sufficient time between now and 2023 for INEC to put its house in order as we seek to enthrone credible elections where the votes of the electorate will not only be counted but would count. While meeting with members of the Inter-Agency Consultative Committee on Election Security (ICCES) last December, Yakubu argued that the use of technology in results collation and transmission was “long overdue, doable, achievable and inevitable.”

And while suspending the Continuous Registration of Voters (CVR) in May this year to prevent the health risks associated with COVID-19, he pledged that INEC “shall continue to apply relevant, value-for-money technology in all aspects of the electoral process and election management.” Now is the time to walk his talk.

he use of technology has become an imperative for our elections. Given our sad experiences since independence with the existing method, there is no justifiable reason not to adopt e-voting, no matter how expensive. All electoral reforms will be meaningless if they are not driven by technology as it enhances integrity and transparency.

Nigerians have for years lost confidence in the extant electoral voting method because of its susceptibility to manipulation. A reliable technology-enabled system could help minimise disputes over electoral fraud and rigging of results and thereby obviate the need for long-drawn litigation.

The relative success of the recent governorship elections in Edo and Ondo States is credited to the use of technology in transferring election results. The introduction of the INEC Result Viewing Portal (IREV) enabled results from polling units to be transmitted to a portal for citizens to view.

This has gone a long way in increasing the transparency of the process. Even though there were also some pockets of violence, particularly in Zamfara and Bayelsa States in the recent bye-elections, it was also an improvement on past elections. The National Assembly thus owes it as duty to Nigerians to make sure they passed the INEC proposal for amendment of the relevant sections of the constitution and the Electoral Act.

As we seek to enthrone transparent elections in Nigeria, INEC should be encouraged by all the critical stakeholders, including the National Assembly, to legalise the use of technology in the elecoral process. We can only wish Yakubu well.

THESE 4 BILLIONAIRES WILL EARN ABOUT N1.2 BILLION FROM INTERIM DIVIDENDS...