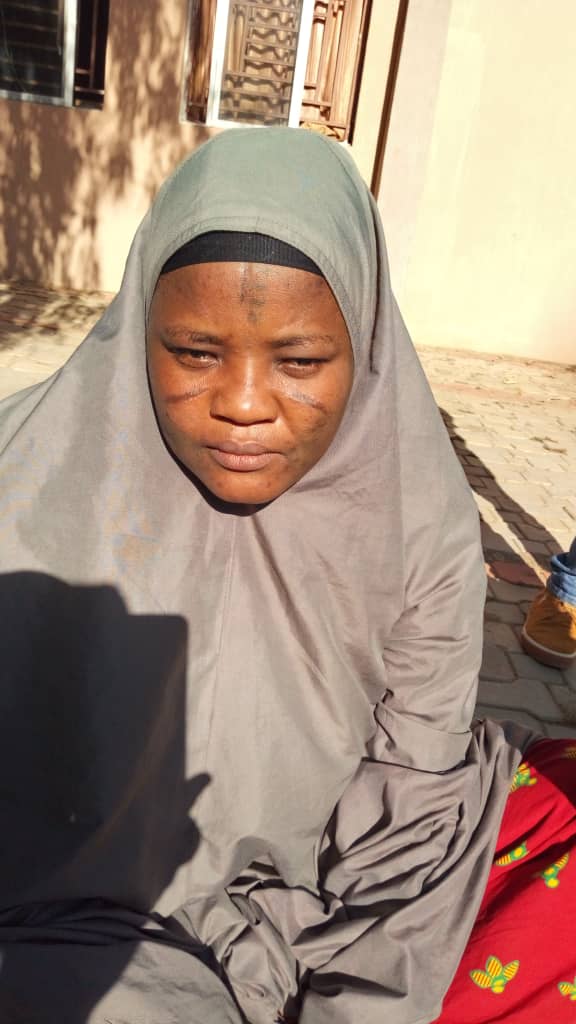 Operatives of the Zamfara State Police Command have arrested a woman, Fatima Lawali, who specializes in supplying arms and ammunition to bandits in Zamfara, Sokoto, Kebbi, Kaduna, Katsina and Niger States.

Among those she supplies arms and ammunition to is the notorious bandit’s kingpin, called Ado Alero, who has been terrorizing Zamfara and neighbouring States.

In a press statement e-signed and released to the National Association of Online Security News Publishers (NAOSNP) by the Zamfara State Commissioner of Police, CP Ayuba N. Elkanah, while addressing a press conference at the Police Command Headquarters in Gusau.

The Briefing, which captured the achievement recorded by the Police in its ongoing operations against criminal elements in the State, he said, was made possible by the intervention of the Inspector General of Police, IGP Usman Alkali Baba, who deployed Police Tactical Team from FIB/STS Force Headquarters Abuja, headed by DSP Hussaini Gimba.

He said that the operations carried out the Police in State led to a serious gun battle with the bandits where unspecified numbers of bandits were fatally injured with others escaped with possible gunshot wounds. Ten (10) assorted AK-47 rifles with magazines containing one hundred and forty three (143) rounds of live ammunition were recovered from the scene.

Giving the details of arrest made and exhibits recovered, he disclosed, “On 25th October, 2021 at about 0930hrs, Police Tactical Operatives of the Command in collaboration with FIB/STS led by DSP Hussaini Gimba on Tactical Operations in the State, arrested one Fatima Lawali ‘F’ a native of Kaura Namoda LGA who specialized in supplying arms and ammunition to Bandits in Zamfara, Sokoto, Kebbi, Kaduna, Katsina and Niger States, respectively.

“Suspect was arrested at Gada Biyu area, under Bungudu LGA with nine hundred and ninety one (991) rounds of AK-47 live ammunition conveying from Dabagi Village in Sokoto State to be delivered to a notorious bandit’s kingpin called Ado Alero who has been terrorizing Zamfara and neighbouring States,” he said.

According to him, investigation is still in progress on her case.

He also disclosed that a 55 years old man, Abdullahi Mohammed was arrested with large quantity of dry leaves suspected to be Indian hemp, in transit to the bandits’ camps.

“On 5th November, 2021 at about 1400hrs, Police Operatives of the Command working in synergy with the FIB/STS operatives, acted on credible intelligence that led to the arrest of the above suspect who specialized in supply of Indian hemp and other illicit drugs to various bandit’s camps in Zamfara, Kaduna, Niger and Abuja axis.

“On interrogation, suspect confessed to the crime and that has led the operatives to swung into further action and recovered large quantity of dry leaves suspected to be Indian hemp at Gwiwa Village of Kaura Namoda LGA. investigation is in progress.”

The CP also revealed that one Babuga Abubakar was arrested in connection with armed robbery, cattle rustling and unlawful possession of prohibited firearms.

“Upon interrogation, suspect confessed that prior to his arrest by the Police, himself, Lawali Na’eka and Almeriya conspired and went to Wanke village in Gusau LGA with over one hundred (100) operational motorcycles where they rustled over two hundred and forty (240) cows belonging to different individuals.”

The Commissioner of Police said that the suspect is still undergoing discreet investigation.

The Command also arrested a man, Lawali Kabiru, who was an informant to a notorious bandit kingpin Dan-Dela.

He said “On 9th November, 2021 at about 2000hrs, Police Operatives working along with Zamfara State Task Force on enforcement of new security measures, while on patrol along Garejin Mailena area Gusau LGA, acted on intelligence information that led to the arrest of the above suspect.

“The suspect, who is a native of Bakin Dutsi village a notorious bandit’s enclaves along Dangulbi road in Dansadau District of Maru LGA, came all the way to Gusau to purchase the items that reasonably suspected to be used by bandits.

“During interrogation, suspect mentioned names as his partners in crime who are known to be notorious bandits and have been terrorizing different communities along Dansadau and Magami axis.

He said some members of outlawed group, Yansakai, were also arrested for attempted murder.

“On 23rd November, 2021 at about 1920hrs, Police in Talata Mafara Division received a distress call that some members of outlawed group (Yansakai) in Talata Mafara LGA, picked a Fulani man to an unknown destination with intent to kill him.

“Police swung into action and rescued the victim, while one of the suspect was arrested and others escaped. Similarly, the victim named Abubakar Abubakar ‘M’ aged 25 yrs old of Gidan Kade Village in Talata Mafara LGA was extensively interrogated by the Police, but could not give a satisfactory account of himself. Therefore, investigation is being carried out.”

The CP also said that a 29 years old man, Bello Muazu, was arrested for attempted rape of a 4 years old girl.

“On 24th November, 2021 at about 1500hrs, a complaint was received by the Police in Talata Mafara LGA against the above mentioned suspect, that on the same date about 1400hrs, a good Samaritan sighted the suspect with the victim in a tight corner trying to remove her cloth and rape her, raised an alarm that led to the arrest of the suspect and brought him to the Station.”

He said the victim was taken to the hospital for medical examination, while investigation was still in progress on the matter.

The CP also disclosed that two suspects, Samaila Lawali and Murtala Bello, were arrested in Kaura Namoda for criminal conspiracy and robbery.

“On 24th November, 2021 at about 1450hrs, the above named suspects were arrested by the Police in Kaura Namoda LGA. The suspects have specialized in terrorizing the people of Kaura Namoda by carrying out heinous crimes such as Armed Robbery, House/Shop breaking, snatching handsets and other valuables.

“Presently one Infinix handset valued sixteen thousand naira (N16,000) and one Radio cover of Keke Napep were recovered in their possession.

“Investigation is in progress to recover other exhibits they have stolen and possible receivers of the stolen items,” he stated.

On the various arrests, he said “We are therefore grateful to the Inspector General of Police and members of his Management Team, as well as the Executive Governor of Zamfara State, Rt. Hon. Dr. Bello Muhammad MON, Matawallen Maradun Barden Kasar Hausa, Sarkin Yakin Daular Usmaniyya, who has been untirelessly supporting Police and other Security agencies in discharging their duties effectively, that led to all the successes recorded by the Police Operatives,” he concluded.

TENSION, OUTRAGE AS STERLING BANK INVESTORS LOSE 28.10% ON SHARES IN...

2023: WHY WE ARE DRAGGING TINUBU INTO PRESIDENTIAL RACE –DAYO ADEYEYE,...