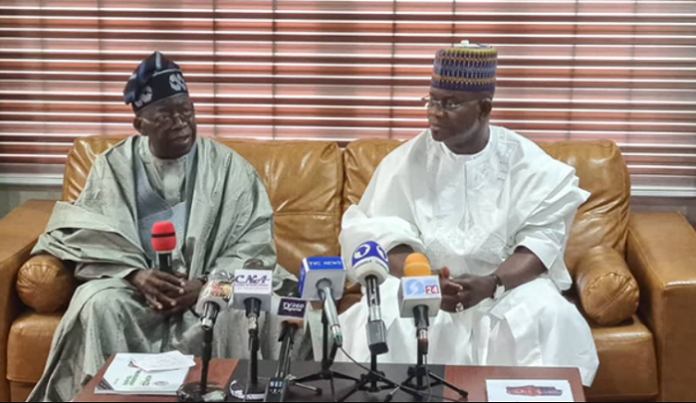 The Governor of Kogi State State and a presidential aspirant in the just concluded All Progressive Congress (APC) presidential primaries, Yahaya Bello, has announced the donation of his campaign organization’s secretariat to the party’s presidential candidate, Bola Ahmed Tinubu.

This is as the governor has also pledged to mobilise Nigerian youths for the presidential ambition of the APC presidential flagbearer.

This was made known by Bello when Tinubu paid him a visit in Abuja barely 3 days after the APC presidential primaries, as part of his consultation and reconciliatory moves aimed at preventing any cracks within the party in preparation for the 2023 general election.

Bello in his speech said, “The exercise (APC convention/primary) has come and gone. I am telling you that I will be that general that will be on the field to command the younger generation – because they believe in me in their numbers – that will lead them to the polling units in every nooks and cranny of the country to make sure that we win resoundingly. Never again will PDP lead this country.”

He also hailed the Tinubu for his contributions to democracy in Nigeria, saying the APC chieftain’s experience sets him apart from the rest. The governor also donated his campaign office to Tinubu.

He said, “Today, I have collapsed my Presidential Campaign Organisation. I am donating my campaign organisation’s secretariat to you.

“I’ve learnt a lot from the little lecture you gave to us. What elders see when they’re in the valley, the younger ones won’t see it.”

Making his own remarks, Tinubu appreciated the gesture and promised to work for the party and the country’s unity. He described the governor as a “son” and commended him for contesting for the APC presidential ticket despite his youthfulness.

He said, “Thank you, all members of Yahaya Bello Campaign Organisation,” Tinubu said.  “You all made a mark, you were resolute. But there’s a difference between a tiger and a lion.”

AfDB’s historical capital increase, a vote of confidence in your leadership...